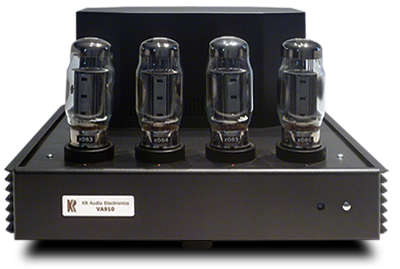 When I met KR Audio’s Eunice Kron at the 2013 Consumer Electronics Show, in Las Vegas, we spoke briefly about where we thought the high-end industry was going and about KR Audio in general. I found her to be very knowledgeable about music and about what’s going on in the industry, and we tentatively agreed that I would review one of KRA’s new amplifiers. After clearing things with my editor, I was in touch with Alfred Kainz, of Highend-Electronics, KRA’s US distributor (KRA is based in Prague, in the Czech Republic). I had worked with Kainz when I wrote about Artos Audio’s Sunrise speaker. He was most helpful, and extremely punctual about getting equipment out and answering my questions. Several days later, the KR Audio VA910 mono amplifiers ($16,500 USD per pair) were delivered.

The KR Audio amps arrived nicely double packed and with everything intact. The VA910 is a vacuum-tube monoblock, each amp using four KT120 tubes and running in ultralinear, class-AB, push-pull fashion to generate a claimed 160W. Each amp measures 11.1”W x 9.6”H x 16.2”D and weighs 44 pounds. The VA910 lacks a big footprint but is quite solid -- after lifting them to move them around, I felt it in my biceps.

The VA910’s case is made of black-anodized aluminum; viewed from several feet away, the pair of them looked like simple black boxes sitting on my amp stands. A closer inspection revealed the seriousness of the detail in the metalwork, and the outstanding build quality. Heatsink fins run horizontally along both sides from front to back. On the front panel is the KR Audio badge on a silver nameplate, and one of the coolest standby switches I’ve had the pleasure of using: Lightly touch this small silver button and the small green LED next to it lights up. On the matte-black top plate sit the four KT120 vacuum tubes and a large black transformer cover; the latter’s front and sides are solid but its rear panel is perforated, which allows you to see the transformers. The look is seamless and very handsome. 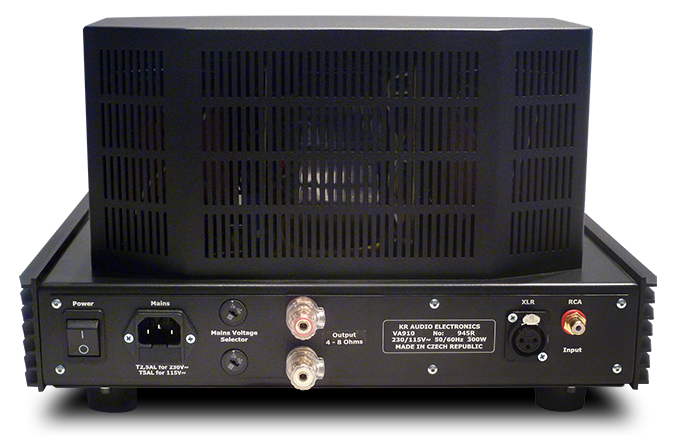 The VA910 comes with a tube cage, but I didn’t use it, preferring to see the glow of the tubes. On the rear panel, from left to right, are: the main on/off switch, IEC power connector, mains voltage selector (a very nice touch), a pair of 4/8-ohm output connectors, and balanced and single-ended inputs. The VA910 uses Lundahl transformers from Sweden, and, as in all other KR amps, a built-in auto-bias circuit so that the owner doesn’t have to bias the stock or replacement tubes -- each time the amp is turned on, it automatically adjusts the bias.

The VA910 is a hybrid design. Per Alfred Kainz, “The input and driver stages are solid-state; J-FET and MOSFET, respectively. This hybrid design is KR’s philosophy -- it allows us to obtain the best of both worlds: the pleasant sound from the tubes and the superior signal/noise ratio from transistors.” As far as construction goes, the attention to detail and the use of high-quality parts throughout make for a listening experience devoid of worrying about amplifier meltdown or how the tubes are performing.

My first impression of the VA910s was of a natural sound that was lifelike and musically effortless. There was no midrange bloat or overblown sweetness, or any of the negative artifacts one often associates with tube amps. The VA910s’ sound exuded openness, detail, and uncanny realism. Their ability to draw me into the music and let me enjoy what the performers were trying to share with me was captivating.

Tonally, the sound had the slightest hint of warmth, to let me know I was still listening to a tube amp. Otherwise, the VA910s’ tonal colors were full and vibrant. The KRAs captured a good amount of detail and information about the recorded event, but in a way that made me want to listen to music and not be concerned with writing a review. The sense of soundstaging and scale was way above average -- the entire front half of my listening room was turned into an enormous soundstage filled with music. I could clearly picture the performers on the stage -- images had dimensionality, and air between them. Sound seemingly came from well beyond the outer edges of my speakers and the 7’ or 8’ of space behind them. The VA910’s smallish footprint belies this amplifier’s ability to latch on to a speaker’s drivers and take total control. 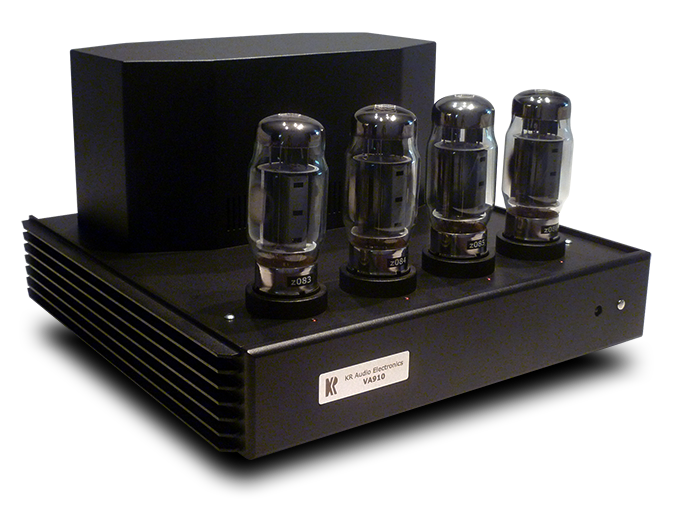 The VA910’s dynamic range was very wide, and the bass punched me in the gut and grabbed my attention. I was surprised at how extended and authoritative this amp could be in the bass, especially with classical music. Loud drum whacks and kick-drums came across as tight and fully controlled, with physical impact. The VA910’s transient response seemed to be spot on in having the requisite snap. Small details, such as drummers moving in their seats and dropping drumsticks, or a bassist’s fingers sliding up and down the strings, were rendered with speed and excellent clarity. Upper frequencies were open, airy, extended, and detailed. Triangles and cymbals sounded sweet and clear, with realistic decays as heard at a concert. The midrange was rendered with a clear sense of presence -- the VA910s did a good job of giving me those “you are there” moments that one should expect from a pair of amps costing $16,500.

One of the VA910s’ major strengths was their ability to believably reproduce voices -- male and female singers had immediacy and transparency. The KRAs’ low-end performance was deep and full, letting me feel as well as hear symphonic works and other full-range fare. The bass was not of the one-note variety, but let me hear bass detail and subtle differentiations in pitch as well.

Hugh Masekela’s Live at the Market Theatre (CD, Four Quarters Entertainment 1805) is a good test of any amplifier on several fronts, especially for live recordings with subtle dynamic shifts. With my favorite track, “Stimela,” the VA910s’ sound was effortless, with a sonic accuracy that made the listening all the more enjoyable.

In Jenny Scheinman’s 12 Songs (24-bit/44.1kHz FLAC, Cryptogramophone), Scheinman’s violin improvisations and Bill Frisell’s haunting guitar make for a very interesting and ethereal sound -- imagine a cross between Norah Jones and guitarist Sheryl Bailey. This is an excellent recording, and the VA910s’ retrieval of its ambience was excellent. “The Frog Threw His Head Back and Laughed” and “Sleeping in the Aquifer” are captivating for how the violin, guitar, and bass play off of each other. Impressively, the VA910s allowed me to hear the intricacies of the player and each instrument’s distinct tonality. Jean-Pierre Mas’s (H)ombre (16/44.1 FLAC, Sunnyside) is quickly becoming one of my favorites recordings for the tuneful ease of its varied melodies, the use of percussion, and the strong bass lines. The VA910s energetically conveyed the midbass and lower-end bass rumble in “Poule d’Eau,” and did a good job of capturing the naturalness and decay of piano notes in “Marianne.” 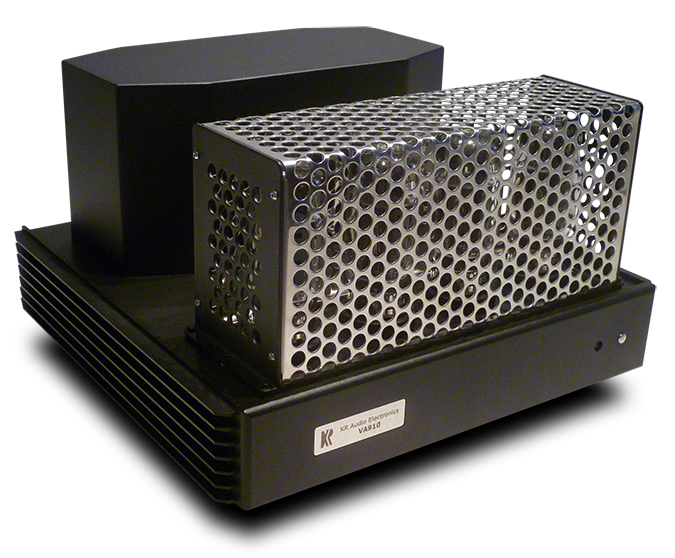 Lafayette Gilchrist’s 3 (16/44.1 FLAC, Hyena) has been something of a revelation. On one of his earlier albums he led a big band that was quite loud and way out there. On 3 he heads a trio, which allows me to hear more of what he’s able to do on the piano -- and he’s a lot better than I thought. From the funky sounds of “In Depth” to the contemplative “The Last Train,” Gilchrist’s ability to play different genres of music is to be commended. The VA910s were able to convey the full scale, energy, and clarity of the piano, which was displayed with all of its tonal colors intact and with its full dynamic range.

I found myself enjoying and rediscovering Eva Cassidy’s Songbird (CD, Blix Street 410045). Her voice on this album has a magical quality that speaks to my heart. The VA910s not only let me hear more detail in Cassidy’s voice, but also connected more directly to what she was conveying through her music. Another disc that I think very highly of is Ella Fitzgerald and Louis Armstrong’s wonderful Ella and Louis (SACD, Verve 314 543 304-2). The SACD edition of this recording of two of jazz’s greatest legends is sonically something special. Though there’s a bit of an edge to Armstrong’s voice, the VA910s re-created these performances with presence and realism. In the intimacy of my listening room, the VA910s helped make it feel as if I’d been given the privilege of attending a concert that had been put on for me alone.

I got good results using my Sound Design Labs, Silnote, and a review set of Clarity cables. All performed very nicely; it would be hard to say that one brand sounded better than the others. Still, when I was comparing amplifiers, the Clarity Cables did let me hear some differences that I found invaluable. The VA910s had a hard time driving my KingSound King electrostatic loudspeakers, an older pair specified as having a low 83dB sensitivity and a nominal impedance of 4 ohms. These speakers have given several amps fits, including some tubed models. The VA910s produced good sound with the Kings, but couldn’t drive them to very loud levels. The KRAs were OK with most jazz and pop music, as long I didn’t try to play it at around 95-99dB through the Kings. That said, the KRAs sounded wonderful with dynamic-driver speakers such as my Meadowlark Herons and Daedalus Argos, up to 100dB and beyond.

I compared the KR Audio VA910s with my McAlister OTL-195s ($8500/pair). Pitting the KRAs against the McAlisters was as fun as it was interesting. The VA910s are much better built -- better fit’n’finish, more solid construction -- but the McAlisters can drive the KingSound Kings better than any other tube amp I’ve tried. However, the McAlisters fall a little short of what the solid-state MSB 202s and the Simaudio Moon Evolution W8 are capable of with the Kings. Up until the level at which the VA910s began to clip, their and the McAlisters’ sounds were pretty close. The VA910s sounded slightly more refined and more detailed, whereas the OTL-195s were more musically involving. The differences weren’t very dramatic -- they sounded pretty close overall, but the voltage the McAlisters were able to swing gave them my nod with the KingSound electrostats.

When I switched to the Daedalus Argo speakers, which I have in for review, the comparison became more interesting. Now that the VA910s were driving speakers that better suited them, the refinement that gave them a slight edge over the McAlisters became a bit more pronounced, and the advantages in ease and musicality previously enjoyed by the McAlisters now swung over to the KRAs’ side of the ledger. I guess that says a lot for the importance of system matching. The VA910s were now showing more of their capabilities in terms of being a very musical, detailed, and natural-sounding amplifier, in a pairing that gave me more of what I heard at last January’s CES. Very impressive indeed.

The KR Audio VA910s were excellent performers in my system during the time I had them, emitting no pops, clicks, or ticks, or giving any kind of difficulty at all. They truly are confidence-inspiring for a tube amplifier. In contrast to some experiences with my tubed McAlister OTL-195 amps, the ease of knowing that the VA910s would always behave as expected made listening a relaxing experience.

The KR Audio VA910 sounds wonderful and looks great. Its build quality -- which should create great pride of ownership -- its refinement of appearance, and its exceptional sound make for a very compelling amplifier. There’s a lot of competition at the VA910’s price, but it’s definitely worthy of your consideration for all that it might bring to your listening room.