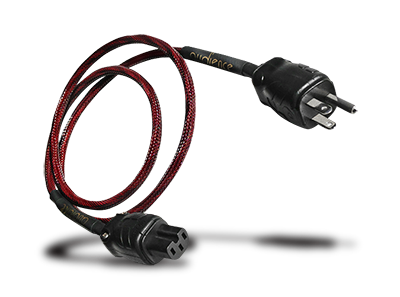 Audience’s top cables comprise its Au24 line. The second generation, the Au24 e cables, appeared several years ago, and were reviewed by Vade Forrester in February 2009.

The third generation, the new Au24 SEs, debuted last year. Besides cables, Audience also manufactures power conditioners, crossoverless loudspeakers with very clever 3” full-range drivers, and a surface treatment for optical discs. If you were to ask Audience how they characterize themselves, they’d probably say that they’re a company of audiophiles and engineers.

From the beginning, Audience has made cables that are much smaller and of lower mass than most high-end cables. They strive for low AC resistance, while not being particularly worried about DC resistance -- DC voltages don’t exist in analog music. Having very low AC resistance doesn’t require large-gauge conductors, but it does require correct cable geometry. Another of Audience’s design goals is to eliminate as much eddy current as possible, and small, low-mass conductors aid that. They believe that eliminating eddy currents is a critical performance factor for audio cables that is poorly understood, and possibly not dealt with at all by some cable manufacturers. See Audience’s website for a white paper on eddy currents. Audience Au24 SE cables have proprietary, high-quality copper conductors and copper-alloy connectors.

To my ears, the standard Au24 SE powerChord sounded like truth and beauty. It didn’t add to or subtract from the sound of my components. If you’ve spent time and money putting together a system in which each component already faithfully reproduces everything without imposing on the sound a signature of its own, you don’t want cables that will upset that neutrality. You want cables that are neutral, with exceptional clarity, dynamics, and spaciousness. The Au24 SE powerChords fit that description perfectly.

Some might describe what the Au24 SE powerChords do as improving the resolution, but that’s not precisely what I heard. I heard nothing drastically different with the Au24 SE in comparison with the Au24. But every sound from a component drawing juice through an Au24 SE powerChord was . . . better. I believe the improvement was subtracted smear rather than overtly improved resolution. Other power cords I’ve heard, even the Au24, seem to smear leading and trailing edges just a little, so that nothing is as clear and detailed as it should be. With such smearing removed, I could have sworn there was more detail, but what actually seemed to be going on was that I was simply hearing everything without the smear that was there before. This removal of smear also made it seem as if the background noise level was quieter than before. The lack of leading- and trailing-edge smear does remove a scrim of noise, making it seem as if the background has gotten quieter. But when the system was on and not playing music, the noise level with the Au24 SE and e powerChords was about the same -- so there really was little lowering of the noise floor. The Au24 SE let me hear textures in sounds that were masked by smear in the Au24. Only careful listening through the smear revealed that the sonic textures were still there with the Au24, but were not as easy to hear. The Au24 powerChords don’t sound poor -- they’re actually much better in that regard than any of the other power cords I had available for comparisons (from JPS Labs, AudioPrism, and Monster, and all costing less than $1000 retail). I would never say the difference between the Au24 and SE powerChords was huge or large or substantial, or even moderate, but it wasn’t difficult to hear the improvements wrought by the SEs. However, someone unfamiliar with my system and reference recordings might take a while to acclimate to their sound before they began to hear differences between the two cords. 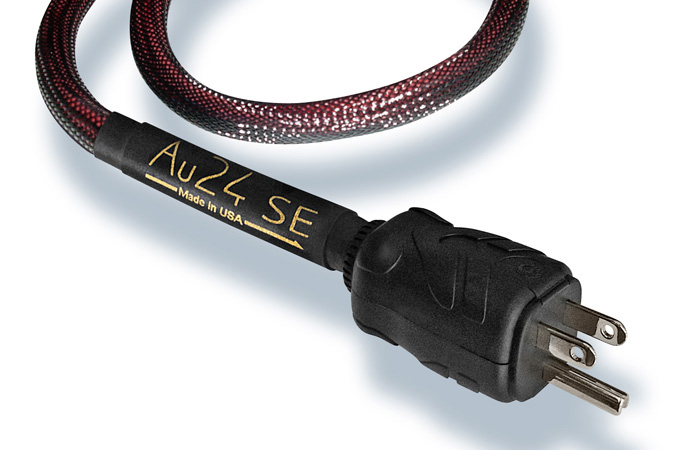 “The Invisible Man,” from the 2012 remastering of Queen’s The Miracle (16-bit/44.1kHz FLAC, Hollywood), has a series of drum whacks near the beginning. I heard these as both more dimensional -- each whack was more separated from the previous and next whacks -- and each sounded more natural and live than the e powerChords or any of the other lower-cost cords available for comparison. With the Au24 SE, each whack produced a momentary visual image of the drum being played, and I just don’t get that result with other cords. Roughly halfway into the song, guitarist Brian May takes a solo that could easily make ears bleed through a too-bright system. The Au24 SE made this brief solo soar into the stratosphere. There were clarity, punch, power, and control aplenty -- exactly what’s needed to keep this solo from becoming an out-of-control mess. Kick drums on this track were very well controlled, with real-life heft and impact. The sense of space produced during “High Hopes,” from the stereo version of Pink Floyd’s The Division Bell in the 2014 boxed set of Blu-ray Discs (24/96 FLAC, Rhino), was fabulously huge, with excellent clarity and excellent dynamic contrasts, easily outperforming the e powerChord and other cords.

I compared the standard, MP, and LP versions of the Au24 SE, using a preamp that needs less than 50W of power. After a couple of hours, it was clear that there would be nothing significant to report; they sounded so similar that anything I came up with would have been extreme nitpicking.

Something that can’t be ignored is that I had to use the 10-gauge version on the power amp before I could hear all the improvements from using Au24 SE powerChords on preamps, surround processors, and source components. A lesser power cord on the amp just smeared things again, even if the sound was cleaner upstream of the amp. 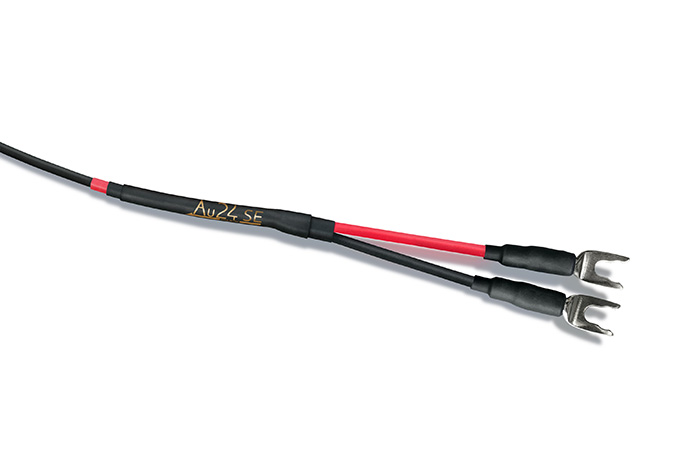 The rendering of space with Pink Floyd’s “High Hopes” was spectacular -- the most room-filling listening experience I’ve ever had. The repeated bell strokes were wonderfully clear, as were all the little ambient sounds woven into this track. I couldn’t get enough of “High Hopes,” or of all of The Division Bell in its latest, high-resolution remastering. That experience just wasn’t the same through the Au24 e speaker cables, or with any other speaker cable I had on hand: Nordost SPM Reference, Nirvana S-L, Magnan Signature, and Monster’s somewhat newer, top-of-the-line Sigma Retro Gold.

The only change made in the Au24 SE interconnect ($1290/1m pair) from the Au24 e are the new RCA connectors. Sounds pretty innocuous, doesn’t it? Probably not much of a bump in sound quality, if any, so no real need for the SE update, right?

Oh, so wrong. The alloy now used in the connector is copper-tellurium. No audio product can “enhance” an audio signal, and a cable and its connectors are no exceptions; all they can do is degrade the signal less. The Au24 SE interconnects are, like the powerChords and speaker cables, the best of their type I’ve heard so far. Once again, neutrality, clarity, space, detail, and tonality were all superior. These interconnects produced fabulous music wherever I used them in my system. The Au24 SE interconnects might have made the most significant improvements in the sound, though the speaker cables were very close, with the powerChords not far behind them. 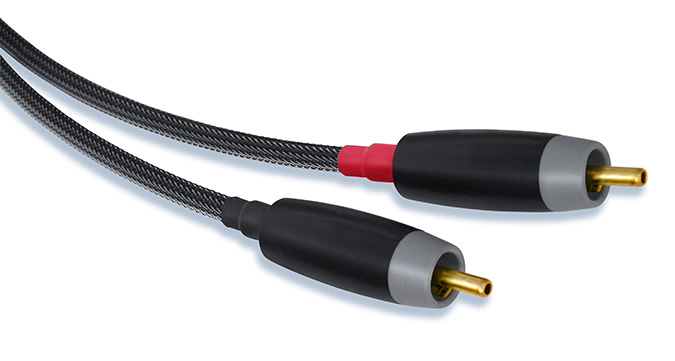 If you have a lower-resolving cable in your system farther up or down the playback chain than one of the Au24 SE models, you won’t hear everything the Audiences can deliver. Having a system outfitted with the Au24 e cables and using only one Au24 SE cable somewhere in the system hid a fair amount of the improvements. If you can’t afford to buy a complete Au24 SE loom for your system, I suggest working your way to that goal in this order: beginning with the speaker cables, followed by the interconnects, then the power cord for the power amp, then cords for the preamp, various interconnects for the source components, and, finally, power cords for the source components. The older Au24 e cables can be upgraded to the latest version as well, if that's what you currently have.

You don’t have to have extravagantly expensive components to hear how good the Au24 SEs are. When I used them with the modestly priced but ridiculously good AudioControl Savoy G3 seven-channel power amp (about $3000 through AudioControl’s system-integrator dealers), everything the Au24 SE cables could do was extremely easy to hear. Components with five-figure prices sounded their best with the Au24 SE cables, but the Vandersteen 3A Signature speakers ($4495/pair) easily revealed changes in sound quality -- and even a sub-$1000 Onkyo TX-NR727 AVR had no trouble revealing that the Au24 SE speaker cables and interconnects sounded better than the Au24 e cables.

Audience’s Au24 SE powerChords, interconnects, and speaker cables are the most satisfying wiring products I’ve used in the last 39 years. They sit at the pinnacle of cable performance, and provide an attractive combination of big spaces, a very neutral sound and marvelously balanced performance, from the deepest bass to the highest treble.