If you’re reading this column, there’s a good chance you identify as an audiophile. I’m with you -- I grudgingly apply that label to myself. But along with all the glory of having a smokin’ system on which to listen to music comes some baggage.

Do you obsess over your system? I do. Every year or so, I disconnect all my separates from each other and redress the cables. I polish the shelves on my equipment rack. I relevel my speakers. I realign my cartridge.

Also over the years, I’ve spent inordinate amounts of time trying to control resonances. I’ve turned a small corner of my listening room into a graveyard of footers, cones, and assorted squishy pucks. About ten years ago I built my own replacement shelves for my Target rack from a sheet of 0.125”-thick stainless steel, Dynamat damping compound, and 1”-thick foam. They ended up looking quite slick.

But given that my listening room is built on a concrete slab, in retrospect I thought this was probably overkill. I did some research into the importance of controlling resonances in an audio system, but could find little more than anecdotal reports on the efficacy of such treatments. My preoccupation with minimizing resonances pretty much ended there -- my system probably doesn’t vibrate much at all, and at the very least, it looks cool. Time to focus on other ways to improve my system’s sound.

Cut to present day. My good friend Rich, from back in junior high, has just bought a turntable, a nice one: a Transrotor Fat Bob. Rich obsesses too, perhaps more so than the average audiophile. One evening a few days after he’d completed his transaction and was waiting for Fat Bob to arrive, Rich brought up resonance control. He had many questions, and being a science-based skeptic, he began asking all the right questions. After digesting a gazillion audiophile websites, Rich was disgusted with the many contradictory opinions and was ready to dispense with the accepted audiophile lore, which he viewed as having the same level of credibility as homeopathy. 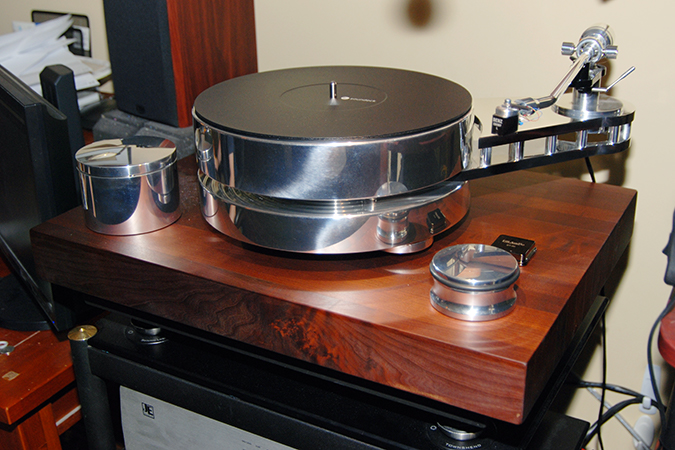 Rich was ready to measure. Using Seismometer 6, an app that turns an iPad into a questionably accurate seismometer, Rich began testing his own inappropriately large collection of footers, cones, and assorted squishy pucks.

At first, I rolled my eyes at Rich’s efforts. While doing my best to answer his many questions, and always aware that my answers were being carefully filtered through thick, pop-bottle skeptic’s glasses, I felt he was going overboard in his journey. After all, his house was built on a thick slab of Canadian Shield, and it probably wasn’t vibrating much at all. What was he isolating it from?

But as Rich rebuilt his Lovan rack from the ground up, using Acoustic Sciences WallDamp damping compound, a sheet of 0.125”-thick mild steel, MDF, a 2”-thick slab of hardwood, and -- finally -- a set of Townshend Seismic Isolation Pods, he shared his test results with me. (Rich is not the handiest guy I’ve ever met, which made his efforts at measuring, cutting, sanding, gluing, and painting these unfamiliar materials all the more admirable.)

Rich achieved some very impressive improvements. A foot stomp on his suspended floor (wood over joists) was instantly damped, the initial impulse far lower in amplitude, and the subsequent ringing next to nonexistent, when compared with a solid-walnut desk situated right next to the equipment rack. With the seismometer resting on any shelf -- not just the top one suspended on the Seismic Isolation Pods -- a tap on that shelf resulted in the similar, significant gains. 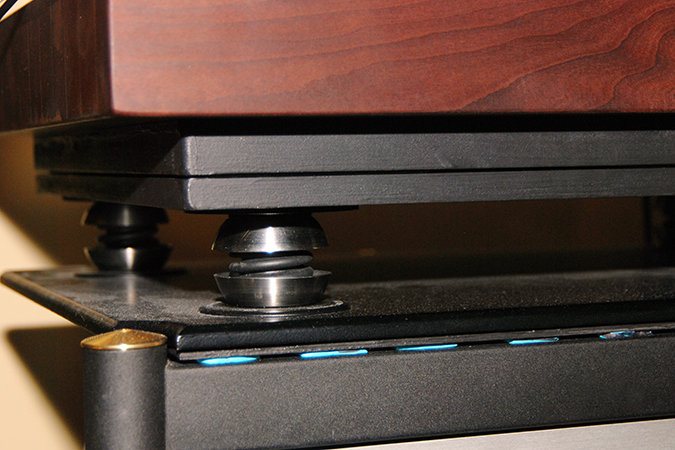 While I think Rich has done excellent work, I still reserve judgment, and still ask my original question: Will this level of resonance control result in any audible gains via his turntable? Since Rich has just got his Transrotor up and running, we’ll never know -- he won’t be moving the new ’table back and forth from the new rack to a similar, untreated rack. That said, he’ll be able to move forward into high-end analog life knowing that his entire system rests on a support with the density of collapsed matter.

I think we could all learn something from Rich’s struggles with resonance control. I don’t think it’s in our best interests to blindly accept science-y claims from any source without at least attempting some sort of rudimentary tests or measurements.

The flip side of the coin is that Rich has invested more than 40 hours on this endeavor. I’d wager that his ’table probably would have sounded just great if he’d plonked it smack dab on top of that wafer-thin Lovan shelf.

But we’re audiophiles, right? That’s not what we do.

I’ve been aware of Jack White’s record label, Third Man Records, for a while now, and I appreciate White’s music and love his dedication to vinyl. However, I live in Canada, Third Man is based in the States, and cross-border shopping has become prohibitively expensive -- so generally I’ve looked on from afar and wished White well.

Just a few months ago, Rob, a plugged-in, vinyl-loving neighbor, informed me that for a quarterly fee of $60, Third Man’s Vault subscription service will send you, four times a year, “a package of limited edition, exclusive vinyl” -- and this quarter they were a) issuing a de-luxe version of Captain Beefheart’s Trout Mask Replica, originally released in 1969 on Frank Zappa’s Straight Records; and b) throwing in a $15/month discount coupon toward Tidal’s HiFi streaming service. While I definitely enjoyed my free Tidal trial, I feel that $20/month is a bit spendy for a dedicated vinyl guy, so I’d been holding out. But when I factored in the Vault discount, I was able to convince myself that a combination of Tidal and Vault subscriptions would be a good deal. 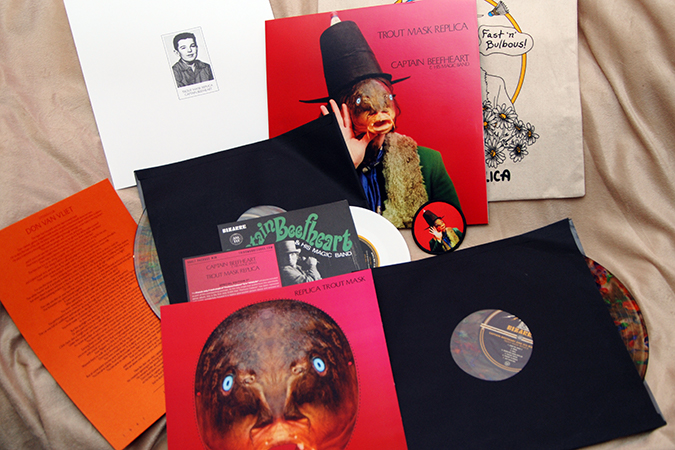 My copy of Trout Mask Replica arrived and I tore into it. Layers of high-rent extras are included. The gatefold sleeve is sturdy and lush, the cover reproduced from the newly excavated original art. The two LPs themselves are pressed on mottled, fish-scale-colored vinyl of an appropriate repulsiveness. Also included is a 7” single of “Pachuco Cadaver” pressed on white vinyl. The whole thing comes in a canvas record bag, inside which are also lots of little cards and notes, including a pop-out replica trout mask, a fabric patch, and some nifty documentation. In short, this extremely high-quality package is exactly what I expected for $60.

I hadn’t heard Trout Mask Replica for many years, and my stars, but it’s a difficult listen. There’s a good-sized dollop of insanity at the core of this album -- not aural confusion or the sound of insanity, but honest-to-god psychosis. Word is the band rehearsed these songs for eight months before actually recording them, while living together in cult-like conditions. Don Van Vliet (aka Captain Beefheart) berated, physically beat, and generally wore down their personalities until all submitted to his demand that they practice 12-14 hours a day. They were living in abject poverty, surviving on fumes, which apparently added to the stress of the situation. Then, under the direction of producer Zappa, the instrumental tracks were all recorded in a single six-hour session in March 1969. According to Wikipedia, Van Vliet’s vocal and horn tracks were recorded over the next few days. 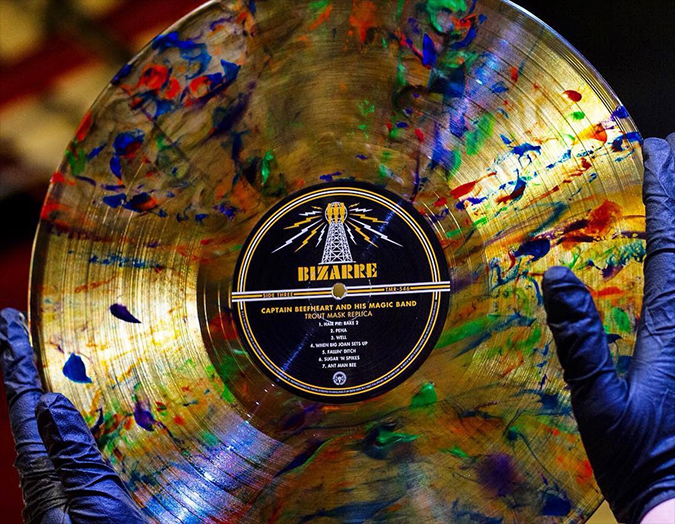 What you hear on Trout Mask Replica is a series of tightly played compositions that, we are to assume, ended up exactly as Van Vliet imagined them. The out-of-sync vocals, the odd rhythms that just don’t cohere, the jangly, random-sounding bass and guitar -- this was all composed, practiced, then performed as planned. You wouldn’t know it on first listen. Or second listen. Or -- really -- unless someone told you and gave you some background into why this is such an impossibly cool album.

Some tracks come close to actually having a melody. Notable here is “Moonlight On Vermont,” which vaguely resembles a blend of old-time spirituals and Delta blues, combined with a truck full of cutlery tumbling down the side of a ravine. It’s hard to make much sense of the frequent spoken-word pieces interspersed in the album, but after a while I just accepted them as interludes sent forward from the late 1960s to provide the album with some ambiance that isn’t abrasive noise.

The sound quality is great -- for the most part. While there’s tons of separation between the instruments and the surface noise is extremely low, there’s a twangy ’60s-quality to the guitars that somewhat dates the whole performance, and it’s hard to suspend reality and fool yourself into believing that there are actual performers between the speakers. Still, it’s a cool period piece, and I can’t complain about the overall sound.

If you’re thinking to yourself, “Hey -- I should pick up a copy,” I’ve got some bad news. Perhaps I should have mentioned up front that this edition of Trout Mask Replica is a limited one, and it’s already sold out. My apologies, and please don’t be mad at me. Next time, I’ll warn you.