In Canada: Silencing Winter Static Snaps with the Furutech destat III and Buying Pot -- Lights, That Is

Way back when, before the age of computer audio, about the time of the ascendancy of the Compact Disc, my expanding collection of records became unmanageable. Milk crates no longer cut it. I ended up buying a five-by-five Expedit shelving unit from IKEA and proceeded to at last sort my records.

This was, essentially, pre-Internet. I had no reference point for how to sort my collection, and no one to ask. Being a systems programmer, I was aware that sort order is vitally important, and is the starting point of any good system design. But how to proceed?

Eventually, I settled on the artist’s last name first, first name second. Joni Mitchell was filed under M. Easy enough, right? But it wasn’t long before I faced a quandary. Although Jethro Tull was indeed an actual person -- he invented the horse-drawn seed drill -- who died in 1744. As far as I was concerned, Jethro Tull was the name of a British rock band. J or T? I made an executive decision -- J, God help me. What about King Crimson? I asked myself. Too late to turn back -- it went under K. I’ve lived with these inconsistencies for decades now. 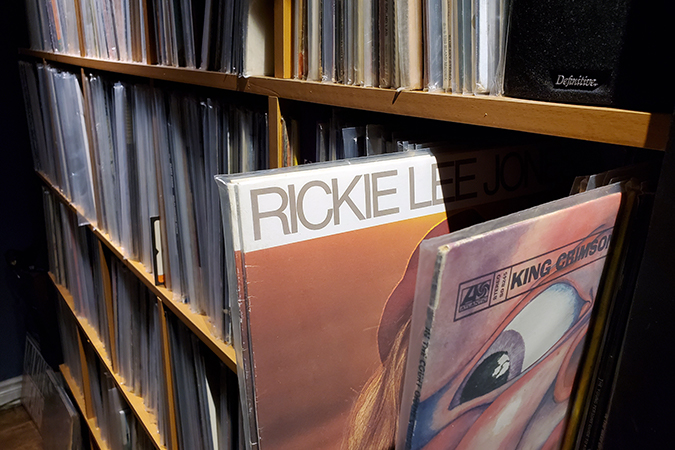 If I were a better, stronger, more caring audiophile, I’d revise my collection, but taking cues from my alter ego of mainframe programmer, I find it easier to live with the existing problems and to hard-code a half-assed solution. I’ll let my daughter worry about it when I’m dead.

It gets cold up here in Canada. Although Toronto is only just north of Buffalo, we regularly get -20°C (-4°F) days, and even colder nights. My house is about 35 years old and needs new windows and doors -- it’s fairly leaky. That means that our forced-air furnace runs long and hard on those cold days, and the built-in humidifier can’t keep up -- the humidity often hovers around 20%. That’s dry. We run standalone humidifiers in the bedrooms overnight, as otherwise we’d wake up with cotton mouth and nasty dried boogers. Not healthy.

Nor is bone-dry air good for LPs. While excess humidity can play hob with album covers -- mold is nasty -- dry air encourages the buildup of static electricity, and every time you remove a record from its inner sleeve builds up that charge. As the two disparate materials -- the LP’s vinyl, and whatever the inner sleeve is made of -- are separated, ions flip from atom to atom, and even more static charge accumulates. While I can’t prove it, I feel that the process of playing the record -- the rubbing of plastic groove against diamond stylus -- further increases static buildup. Add it all up, and when I remove an LP from the turntable at the end of play, I often hear a nasty crackle -- and, more often than not, the record mat comes away from platter, stuck to the record. This happens frequently with the felt mat provided with my VPI Prime Signature turntable, and about a third of the time with the rubber mat that comes with the Dr. Feickert Analogue Volare ’table (review forthcoming).

This mat-lifting business is inconvenient and annoying. I hate it, but I’ve had no way to keep it from happening. And consider the fact that the electrical signal generated by a moving-coil phono cartridge is insanely low -- Top Wing’s Blue Dragon, which I reviewed a year or so ago, outputs a feeble 0.2mV. It doesn’t take much to believe that a big whack of static could interfere with such a pathetic little signal.

Beyond the concept of absolute fidelity -- the altar at which most audiophiles worship -- static is an annoyance, and one I’ve suffered in silence. No longer! So over the past year I’ve been using Furutech’s destat III static-charge eliminator, with great success. 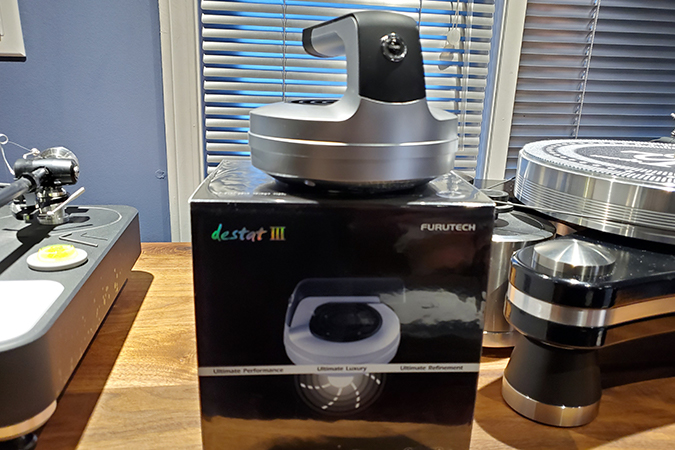 The destat III ($390 USD) looks like a household appliance. Its handle stores four AA batteries, which power the fan enclosed in its main body. The destat III is made of molded, matte-finished plastic, which strikes me as a little low-rent for $399. Still, it’s sturdy enough -- I dropped it once from waist height and it survived without damage.

The bottom-firing fan blows out a balanced stream of positive and negative ions produced by Furutech’s Balanced Ion Flow Generator. According to Furutech, the destat III incorporates their Nano Crystal2 Formula (NCF), which they describe thusly:

Since a vinyl LP can’t conduct electricity, it’s not feasible to simply ground the LP and drain away static charges. Instead, you need some sort of active draining method, such as that employed by the good old-fashioned Zerostat -- or an ion generator such as the destat III.

Thumbing the button at the front end of the destat III’s handle turns on the fan for 15 seconds -- an LED next to the button lights up for the duration. The fan is exceptionally gentle; when I casually passed a hand under it, I barely felt any airflow. But when I aimed the destat III at my face, I realized that it puts out a reasonable amount of air.

While I got very good results with the destat III (see below), I’m conflicted about precisely how well it worked. Just as with different ways of cleaning LPs, I found it impossible to devise any sort of definitive test of how well the destat III eliminated static charges from my LPs. 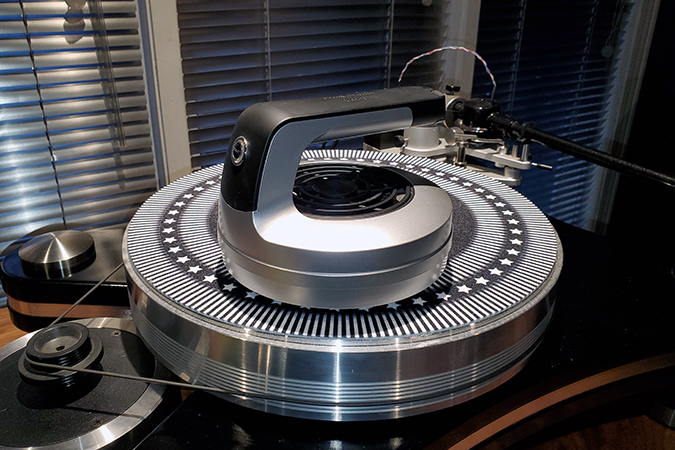 During a single listening session, with records pulled from the same cube of my rack -- I’d played none of them in recent memory -- I could never replicate the same levels of in-use static. Sometimes I’d lift a record from the mat and it would come quietly, without a struggle, leaving the mat behind. Other times, I’d end up peeling mat from LP as if they’d been glued together. And still other times, the record would lift off smoothly, but with an annoying, arm-hair-raising crackle.

But these scenarios weren’t repeatable. Once the record was off the platter and in my hands, the static charge was essentially gone. That said, in those cold, dry winter months I found myself relying on the destat III. My process was as follows:

This all sounds more involved than it actually is. After only a few records, all of these actions were part of my muscle memory. And once I began using this routine, I experienced no more static snaps or lifted mats.

In the end, I regard static-charge elimination much as I regard flossing my teeth. Some days I was real thorough, flipping records and treating both sides. Other days, I’d be lazy and do the half-assed streamlined job, leaving the record on the platter. About one day in five, I didn’t bother at all.

What about the sound quality? I found that tricky to assess, as I didn’t figure out a way to do repeatable tests. That said, during listening sessions in which I consistently used the destat III as directed, my system sure as hell had a lower noise floor. Ticks and pops were minimized in both number and amplitude, and physical surface noise was noticeably reduced in level.

In its promotional copy, Furutech suggests using the destat III’s fan to blow dust from LPs before play, but I didn’t find the fan powerful enough to dislodge any dust from record surfaces. However, its reduction of static made it possible for my AudioQuest anti-static record brush to scoop up more dust and leave less behind on the record.

In all, I couldn’t be more pleased with the Furutech destat III. It did what Furutech says it will do. And its batteries are included.

As I said, our house is over 30 years old, and we’ve got a list of much-needed renovations to do -- a few fun ones, but mostly mundane structural improvements. Which to do first . . .

Pot lights! Just this past week, I employed the services of Moe at Quality Pot Light here in Toronto to install a couple dozen pots, in the kitchen and in my daughter’s room. Never one to miss an opportunity to further fetishize my audio system, I asked Moe if he could reach over the newly installed audio rack and slam in one pot above each turntable. It would be a fussy installation -- the rack is essentially fixed in place -- but Moe was more than happy to accommodate.

I moved the Dr. Feickert Volare to the other side of the room, removed the armwand from the VPI Prime Signature’s tonearm assembly, and covered the rest of the rack with tarps. It took Moe about 45 minutes to install the two pots and bulbs and a dimmer switch. To drop the line to the new switch, he made two small, neat cuts in the ceiling that I’ll have to paint, but other than that, the installation went clean as a whistle, and I’m thrilled with the result. Now I have direct light at the front of the room, and I can turn down my other lights while still keeping my ’tables well lit. The pots are 3000K LEDs, which are a reasonably warm white -- just perfect, given the darker tones of the rest of our décor. 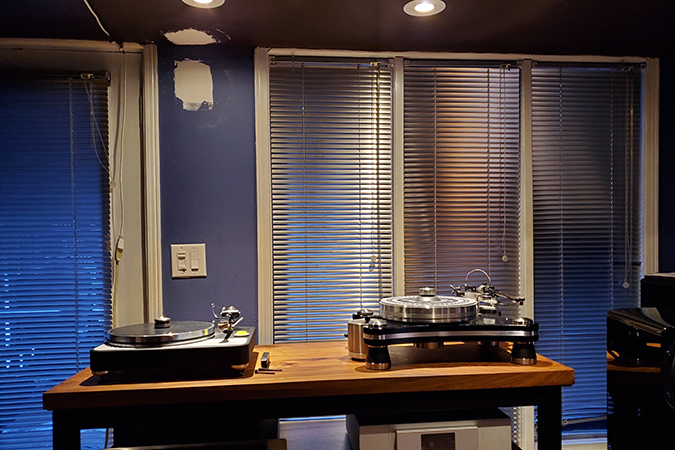 While I’m happy with the lights, I’m even more delighted that Moe answered my questions about the process and let me watch him work. The dedicated power line to my system is a bit of a hodgepodge -- it terminates on the opposite side of the room, and the system is fed juice through an extension cord. While this delivers current just fine, it doesn’t look great. I’ve always wanted to run two lines right over to where my system resides.

Now, having watched Moe fish lines and drop them down to a switch, I feel reasonably confident that I can run a power line from my panel to where I need the outlets. Stay tuned for the adventures of office-guy Jason trying to be an electrician.