In my multiple articles on luxury audio over the last decade, I’ve missed some things. Today, I come to you a changed man -- or, at least, a somewhat more experienced audio journalist.

In October 2014 I wrote an article titled “The Luxury/High-End Conundrum.” That article was prompted by reader Craig’s letter to me on the subject, which can be read in its entirety in that article. Among other things, Craig said:

I now self-identify as a music lover, not as an audiophile. I do this because, as a music lover, I recognize the need and value of specially designed (and often very expensive) audio equipment. Because of this, I am drawn to the high end of audio. I come seeking fidelity. But I am often frustrated by an increasing priority for and dedication to luxury. I have no problem with luxury or those who seek it, but it’s not what I am looking for. What to do? Well, that’s the conundrum.

The following month, November 2014, I responded to Craig in another editorial, “The Luxury/High-End Conundrum: A Solution.” I wrote that, as far as I was concerned, luxury high-end audio products “contaminate the sandbox. They’re not about performance, folks -- they’re about catering to a Far East market that demands ever-more-expensive gear whose design goals have nothing to do with those of high-fidelity audio.” I concluded by saying, “Ultimately, the not-stupid-rich audiophile needs, once and for all, to leave behind the notion that the luxury marketplace has any bearing on the quality of sound he or she aspires to own. Can you imagine an audiophile community in which, instead of discussing the price of the latest flagship model, we compare the lengths of our signal paths, or the distortion measurements of our loudspeakers -- or, horrors, the actual sound -- all irrespective of price? I sure can.” 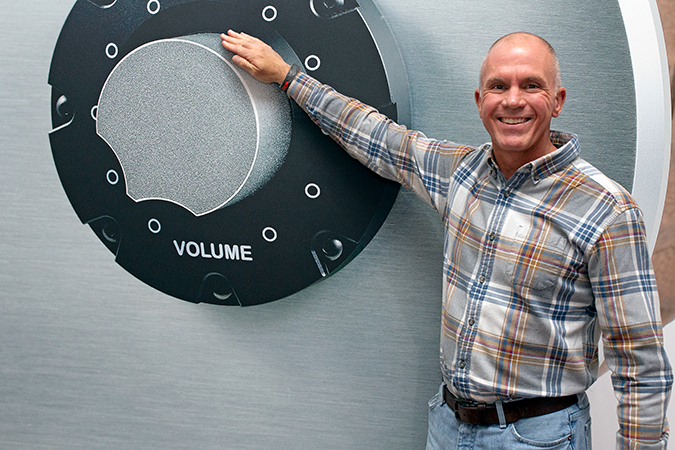 What an idiot. Contaminate the sandbox? Why not see the value in having more than one sandbox? And appreciate the existence of a luxury sandbox and what it means to the kids who play in it? After all, no one’s forcing anyone to join them there.

Although this transformation in my view of luxury audio began some time ago, it was completed only recently. In response to my “Opinion” of last month, “The Purchasing of Luxury Audio and the Pursuit of Hi-Fi Are Two Different Hobbies,” a high-end audio manufacturer and watch aficionado who asked to remain unidentified sent me a link to a recent article in Fratello Magazine by Rob Nudds: “Designing Watches for a Market on the Move.” The markets devoted to luxury watches and high-end audio are similar in many ways, though the former is far greater in terms of annual sales. One passage in Nudds’s piece struck me like a ton of bricks:

Truly successful designs -- those that stand the test of time -- tend to have one thing in common. They are not just designed by the designer, but also for them as well. Of course, it is possible for a brand to design a watch by committee, utilizing sales data, broad demographic analysis, and current market trends, and have no little success with it (commercially, at least). But the icons of the industry are rarely born this way.

How is this significant for, or even applicable to, high-end audio?

With today’s advanced computer modeling, the design for a floorstanding speaker of unquestionable high fidelity -- that is, one that can reproduce a close approximation of the input signal according to measured performance parameters such as frequency response, off-axis dispersion, distortion levels, etc. -- can be spit out by a computer and manufactured post haste with technologies now commonly available. This design -- let’s say a rectilinear box of folded MDF with a common vinyl or real-wood veneer, a 1” dome tweeter immediately above a 5.5” midrange-woofer, and below it a pair of woofers -- will reproduce your music with a high degree of fidelity. Let’s call it the Rectilinear-1. You can find versions of it priced anywhere from a few hundred dollars to many thousands, because it’s precisely what many audiophiles are looking for.

The Rectilinear-1 is a hi-fi product; it will never be a luxury product. Its creation fundamentally differs from that of speakers conceived by designers moved to create something unique, something that contains a piece of themselves, with qualities that can’t be mass produced, or assembled from ordinary materials using common manufacturing technologies. In short, the Rectilinear-1 is not a design that was inspired, as the word is defined in Merriam-Webster’s 11th Collegiate Dictionary: “outstanding or brilliant in a way or to a degree suggestive of divine inspiration.”

So what chance does the Rectilinear-1 have of being inspiring?

A wristwatch may only tell the time, but it makes a statement about the owner. A car only has to get you from A to B, but it also makes a statement about the owner. Unlike other luxury goods, which earn their reputations through a mix of readily comprehensible quality, style, longevity, and provenance, most high-end audio is too young, too amateurish, too mysterious, and too subjective to enjoy the instant appeal of fine wristwatches, supercars, tailored suits, or other desirable items, which are self-explanatory. The exceptions are the ones that will survive.

Almost by definition, those luxury high-end products that survive, that become iconic in and of high-end audio, are fundamentally different from those that could be designed by most any committee of designers at literally hundreds of companies worldwide. 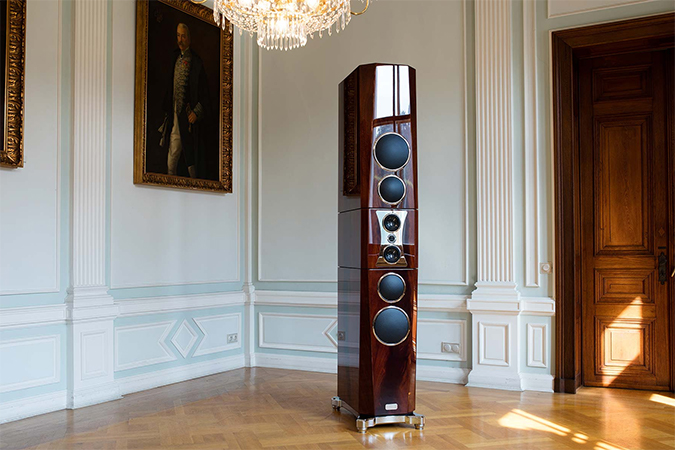 I think the title of my “Opinion” last month stated it pretty clearly: “The Purchasing of Luxury Audio and the Pursuit of Hi-Fi Are Two Different Hobbies.” But I now think I was wrong in 2014 to dismiss the value of the very existence of luxury audio, and the joy it brings to its creators and collectors.

So many companies these days make uninspired hi-fi gear, and so many writers recommend that gear only because it fulfills values -- of industrial design, measurements, and functionality -- that are commonly agreed to result in high-fidelity sound. To some degree I’ve been one of those writers, but now I question some of the advice I’ve given readers over the years. Sure, those common products are fine -- if that’s what you want. But some people want something different, and are more than willing to pay a great deal more for it. I should have recognized that that space, too, needs to be filled with great alternatives. And it is.

The late David Wilson, founder of Wilson Audio Specialties, knew this better and earlier than almost anyone else in audio. Interviewed in Stereophile in fall 1995 by the late Wes Phillips, Wilson said, “I’ve found that, as a designer, it’s important that my products express my design. I’m not market-driven, per se. I design products that I enjoy, and there are always going to be some people out there who enjoy some of the same things that I enjoy in a loudspeaker -- those people constitute our market.”

Had Wilson manufactured a Rectilinear-1 equivalent with the crossover design spit out by his computer and retailed it for a few thousand dollars a pair, would Wilson Audio have enjoyed the success they’ve experienced over the decades? Maybe, maybe not. Perhaps a better question is this: Would Dave Wilson have been as satisfied taking one of those designs home for himself?

I would guess that no, he wouldn’t have. And the customers around the world who’ve enjoyed Wilson’s visions of what a loudspeaker can be, and have paid tens of thousands of dollars to own one of those visions, would also have been deprived of sharing in the joys of the kinds of ownership experiences those visions can make possible.

The luxury buyer wants to be among the inspired. To share the vision of the visionaries.

In his article for Fratello, Rob Nudds said: “Time and time again, wide-eyed, somewhat green Kickstarter campaigns pop-up promising to ‘democratize’ luxury by making it affordable. Unfortunately, however, such a promise doesn’t even make sense. Luxury cannot, by its nature, be democratized; quality, however, can be.” By democratize, Nudds means: to make something accessible to everyone. Audiophiles in 2020 can buy something really good -- something of high sound quality -- for not much money. I could name 100 speaker models costing under $2000/pair that produce high-fidelity sound and will probably last you 20 years. Rectilinear-1s are available almost everywhere. Would you prefer Black Ash or Matte White?

In short: To some, the Rectilinear-1 is boring as hell. It’s too mundane, even commoditized -- certainly not an indulgence.

Nudds: “But as far as customers are concerned, the one thing that matters is that their purchase brings them joy.” To some customers, the mere notion of the Rectilinear-1 producing by-the-numbers high-fidelity sound in their living room is so uninspiring that they would take no joy in owning a pair. Audio writers who see no point in spending more money than what’s needed to accomplish what the Rectilinear-1 can do are admittedly playing in a big sandbox -- but there are other sandboxes. 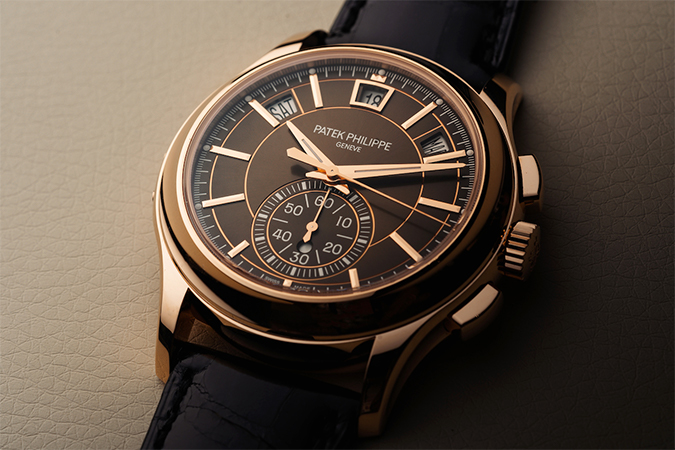 Patek Philippe is one of the world’s most prestigious makers of watches. Each year, the Swiss company has a waiting list for their new models, and they refuse to increase production. The company’s president, Thierry Stern, was interviewed in 2018 by Jack Foster for the US magazine Hodinkee. Stern said this about Patek Philippe watches:

It’s only about beauty. And this is really what is the most important with Patek. I strongly believe that if you have a fine product that is beautifully done, that will last, maybe go from one generation to the other one, there’s no need really to have a very clear marketing brief and to think about the future. Do what you believe is the best for the brand. That’s what my grandfather at the time also told me. He said, “Enjoy what you are doing. Propose a design that you’re going to like. Travel the world and listen, also, to your customers. It’s going to help you also to make great designs.” And that’s what I do today.

And so the strategy of Patek Philippe cannot be read in any books. You are not going to be able to go to the best school in the world and try to understand that. Because, even myself, I do not understand exactly how it works. It’s just a matter of having this passion in your heart and being willing to do the best and finest watches in the world.

Just as the Apple Watch will never be mistaken for a Patek Philippe, a Rectilinear-1 will never be a Magico M9, a Rockport Technologies Lyra, a Sonus Faber SE17, a Tidal La Assoluta, a Vivid Audio Giya G1S -- or a Wilson Audio Specialties Master Chronosonic. And for that diversity, the world of high-end audio, whether luxury audio or a strict pursuit of high-fidelity sound -- is a better and more interesting place.

If you are an audio writer or audiophile who sees only value in the Rectilinear-1 and its ilk, your judgments of the value of such products are only that -- your judgments. Someone may buy a luxury audio product for reasons you’d never buy anything, and those reasons are perfectly valid to them.

I used to know that. Somehow, I forgot it. Now I know it again. Sheesh.