I’ve long been a fan of preamplifiers from Blue Circle Audio. From their early, surprisingly affordable, tube-driven models to the hybrid and solid-state preamps available today, Blue Circle has provided something for everyone. The sounds of their preamps have never been etched, or so overburdened with detail that you could hear a fly crawling on the recording-studio wall. Nor did they sound too tubey. Blue Circle preamps have always served the music, and the upgrade program instituted by founder-designer Gilbert Yeung has made it possible to begin relatively inexpensively, then upgrade to exceedingly good sound.

One thing I noticed a while back, however, was that Blue Circle’s solid-state preamps were getting better -- closer to having the sweetness and subtleties that come with tube preamps, with better retrieval of detail, while keeping the strengths that solid-state preamps have typically had at the highest and lowest ends of the audioband. This was clearly evident in the BC109, which I first heard at the Rocky Mountain Audio Fest in 2010. I spoke with Gilbert Yeung about reviewing the BC109, and when the situation presented itself, I was ready.

Soon, a BC109 ($4275 USD in basic form) was delivered and set up, as had been promised. It came double-boxed, packed nicely, and included an owner’s manual and power cord. The BC109 is a nice looking, solidly built preamplifier measuring 17.5"W x 3.5"H x 15.5"D and weighing a robust (for a preamplifier) 35 pounds. Much of that weight, no doubt, can be attributed to the fact that my review sample included the optional CP1 power supply -- essentially, a huge capacitor bank that costs an additional $3420, for a total price, as reviewed, of $7695. Once its "supercaps" have been charged, the CP1 allows you to operate the BC109 without having to plug it in. 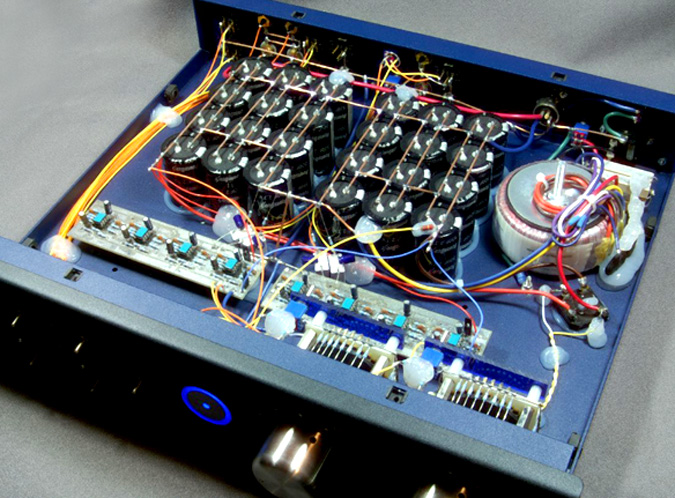 A supercap-based power supply is more expensive than batteries, but has advantages, according to Yeung: "The supercap is a type of capacitor that can hold a lot of energy and can release it over a long period of time. Unlike battery-based power supplies, which typically have a life of about two to three years, supercaps don’t have memory and therefore can be charged and recharged at any moment without negative effect. Supercaps have a useful lifetime of 20 years or more without degradation. The sonic advantage of the supercaps is that it is a faster power supply allowing for better transient response and high frequencies."

This sort of supply can come in quite handy, especially if you don’t use any kind of power-line conditioning, or the power supplied to your system is not very clean or stable. The basic BC109 has enough power-supply capacitance to run for two hours without AC power; a fully charged CP1 will run a BC109 for six hours. A second supercap supply, the CP2, can be configured to run for up to 36 hours without need of AC power (contact Blue Circle for price).

My review sample of the BC109 had black front and rear panels, and a blue-painted steel cover for the top and sides. At the right side of the front panel are two large stainless-steel Shallco attenuators, to control the left and right output levels. At the left are three pairs of toggle switches for selecting the input; in each pair, one switch is for the left channel, one for the right. From the top down, these pairs are for Inputs 1, 2, and 3. Flanking these on both sides are two more toggles, for Loop left and right, which can be configured for a tape or a processor, depending on your needs.

On the left side of the rear panel are an IEC connector, above it a toggle switch to select Ground Lift, and to its right a toggle switch for engaging the CP1 power supply. When this switch is turned off and the red LED between the two volume controls is off, the BC109 is being powered by the CP1. The remaining connectors are: one pair each of XLR and single-ended outputs, one pair of XLR inputs, and two pairs of single-ended inputs. There are also XLR connectors for use as a tape loop. Inside, the circuitry is very clean and neat, wired with topnotch craftsmanship. Depending on whether you go with the CP1 or the CP2 power supply, or neither, will determine how full or empty that section of the preamp will be.

I began my listening sessions with the CP1 power supply disengaged. The first thing that struck me about the Blue Circle BC109’s sound was how balanced it was. I immediately felt drawn into the music, and experienced many of those toe-tapping moments. The BC109 was a bit to the warm side of neutral, a sonic trait I quite enjoy. This warmth helped me enjoy the music more than does the detailed, etched sound of some components. The BC109, although musically easygoing, did an admirable job with detail and transient response. I noticed all the details in my recordings -- such as the sounds of an audience in an intimate venue, or the hall sounds at a symphonic event -- but it was never in my face. Instruments such as cymbals and triangles possessed a sweet, extended shimmer that was almost lifelike and really shone through. The BC109 did an especially nice job of letting me hear the complexities of the solo piano. The initial strikes of hammers on strings, and the subsequent decay, were very lifelike, and did a good job of allowing me to hear the differences between the tones of, say, a Steinway and a Bösendorfer.

The BC109 had a rich, warm palette with which to paint music’s tonal colors. This was clearly evident in its handling of singers. Vocal registers were replicated with a sense of realness, especially with that hint of tonal warmth that the BC109 possessed. The BC109’s performance at the frequency extremes was better than average. The highs sounded good; the upper registers, though extended, didn’t draw attention to themselves, nor did they sound soft or rolled off. The lower registers were full, with ample weight. Where the BC109 was strongest, however, was in the midrange. There I heard a liveliness I don’t usually associate with solid-state preamps, and that made most recordings more fun to listen to. The range of music that covers the lower midrange to the upper bass was dynamic, tuneful, and rhythmic. Another quality the BC109 excelled at was soundstaging: Stages were wide and had good depth, creating a sense of dimensionality that enhanced the physical presence of performers in my listening room.

So far, so good: the BC109 was a solid performer on its own. But if you want it to perform at a much higher level, the CP1 is a worthwhile investment. With the CP1, the music emanated from a darker, quieter background, and notably increased all of the positive attributes I’ve so far ascribed to the BC109. Especially notable were improved transient attack, dynamic range, bass authority, and the ability to resolve complex pieces of music. 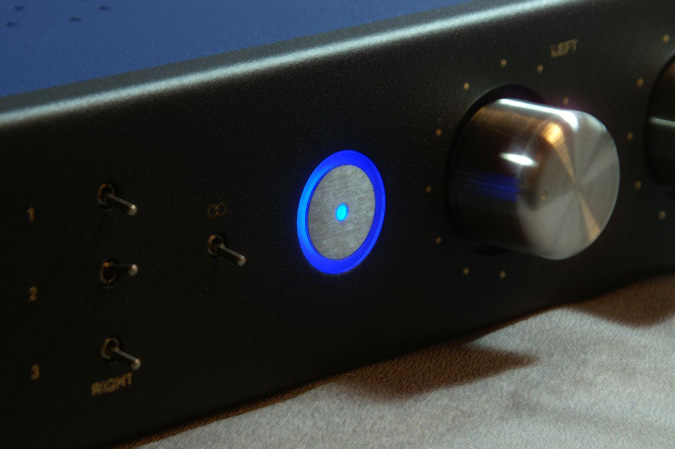 When I played In Full Swing, from Mark O’Connor’s Hot Swing Trio (16/44.1 FLAC, Odyssey/Sony Classical), the BC109 laid out the music with a great sense of naturalness and realism. Jane Monheit’s voice in "Honeysuckle Rose" and "Misty" was replicated with a sweetness that, when combined with Wynton Marsalis’s amazing speed and detail on trumpet, made for a striking combination. Marsalis’s technique and articulation in "Tiger Rag" came across as lively, inspired, and involving.

The Sheryl Bailey 3’s Live @ The Fat Cat (CD, Pure Music 21404) really benefits from its club ambiance, and the BC109 showed its mettle, delivering to me the feeling of being present in The Fat Cat as the performance took place. I enjoyed listening to Bailey’s virtuoso electric-guitar work, but Gary Versace’s work on Hammond B3 organ in "The Wishing Well (For David)" was mesmerizing. Another live recording that gave a good example of the BC109’s ability to reproduce a live event in my listening room in a lifelike way was Wynton Marsalis’s Live at the House of Tribes (16/44.1 FLAC, Blue Note). Wynton’s brother Delfeayo has produced some of the most compelling live recordings. The BC109 did such a wonderful job of conveying Wynton’s emotion and energy in "You Don’t Know What Love Is" that I had the eerie feeling that my listening room had been transformed into a jazz club.

The odd pairing of guitar geniuses Jerry Garcia and David Grisman produced a wonderful-sounding album in So What, their tribute to Miles Davis (16/44.1 FLAC, Acoustic Disc). The BC109 allowed me to clearly discern the tonal contrasts and fingering techniques of these two masters, as well as the abundance of transient response and ambient cues in this studio setting. The BC109 showed good bass capability and power when reproducing Thomas Newman’s soundtrack score for American Beauty (16/44.1 FLAC, DreamWorks). In "Root Beer," the bass was not only tuneful but rendered with excellent detail. Dynamics were also handled well by the BC109. Midway through "Gavotte in D Minor," from Jacques Loussier’s Plays Bach (16/44.1 FLAC, Telarc Jazz), André Arpino has a driving, heart-pounding drum solo that the BC109 captured with all of its energy and verve intact.

The BC109 did a wonderful job with pianos, and Earl Wild’s performance of Tchaikovsky’s Piano Concerto No.1 (16/44.1 FLAC, Chesky), with Anatole Fistoulari conducting the Royal Philharmonic Orchestra, was an excellent example. The attack and decay of the notes, the sweeping, full-bodied sound of the piano with all of its tonal character, add up to Wild’s confident interpretation of this piece. The BC109 did as fine a job of reproducing orchestral strings here as it did with William Boughton and the English String Orchestra’s recording of works by Butterworth, Parry, and Bridge (16/44.1 FLAC, Nimbus), allowing me to hear the different string tones emanating from a wide, deep stage.

I had on hand another well-made and musically endearing preamplifier: a Herron Audio VTSP-1A. For this comparison I did not use the Blue Circle BC109’s ($4275) CP1 power supply (add $3420), which would have given it an unfair advantage over the Herron ($3995 when available).

The results were interesting. The Herron is tubed and sounds it; it gave a bit more bloom to performers onstage, and to the dimensions of those stages. The BC109’s soundstaging capabilities were nearly as good, but without as much bloom. Where the BC109 flexed its muscle was in transient response, greater dynamic range, and better low-end extension and power. Both the Blue Circle and the Herron did good jobs of reproducing instrumental colors and timbres, and both excelled at presenting credible facsimiles of voices.

The VTSP-1A produced a sweeter portrayal of the recorded event, the BC109 a more honest view. Either would be a fine component to build a system around, especially at their prices. Your choice would come down to your personal sonic preference. For me, the option of buying the CP1 would also weigh in the BC109’s favor. The BC109 was a very good preamp on its own, but when used with the CP1, its performance rose to another level.

I had a good time reviewing Blue Circle Audio’s BC109 -- it is an extremely musical preamp. Its construction is attractive and solid, and it performed flawlessly during the time it was in my system. It worked well with tubed and solid-state amplifiers, and was not cable dependent. Likewise, the BC109 performed consistently well with all recordings. Compared to other preamps in its price range, the BC109 is a solid performer, and will give the prospective owner good sonic value, especially when used with the CP1 power supply.