Funny how things come around. Ten years ago, when I first dipped a toe in computer-based audio, I considered using as my reference DAC Weiss Engineering’s DAC2 ($3380 USD when available). At the time, the only way to get digital audio out of a PC was with an add-on soundcard, and the only good way to get digital audio out of an Apple Mac computer was with FireWire -- digital audio via USB was still only a glimmer on the horizon. I was already a Mac user, and the Weiss DAC2 seemed an obvious choice: it had a FireWire input, in addition to TosLink, S/PDIF on coax, and AES/EBU on XLR. However, on hearing that Apple would soon no longer support FireWire, I bought a Logitech Transporter ($1900, discontinued) and began streaming digital audio via Bluetooth. When USB audio became more widely supported, I connected my Mac directly to the Transporter with a Halide Design Bridge USB-to-S/PDIF link ($450), so I could stream 16- and 24-bit PCM files directly to the Transporter. Later, Weiss added a USB input to their DACs -- but by then I’d purchased what is still my reference DAC, a Meitner Audio MA-1 ($7000).

Daniel Weiss started out at Studer in 1979, and in 1985 left to found Weiss Engineering. At first, Weiss designed and manufactured digital audio gear for recording studios, but beginning in 2000, the company, based in Ulster, Switzerland, expanded into high-end home audio. Their DAC501/502 series of digital-to-analog converters -- Weiss calls them “DSP D/A converter and network renderers” -- distills the essence of what Weiss, the man and the company, have learned in the last three or four decades.

A powerful nonswitching power supply is used, and all sensitive voltages have their own regulators, which are separated between the left and right channels. Weiss claims that this results in an analog output stage free of noise and channel crosstalk.

A high-precision, low-jitter clock generator is responsible for clocking the DAC501’s DAC section. Weiss states that the “input signals are converted to the 195kHz sampling frequency for optimal signal quality.” This reportedly reduces jitter.

With a stainless-steel case and a faceplate of machined aluminum, the DAC501 is fairly compact at 7.4”W x 2.6”H x 11.8”D, with a very manageable weight of 6.6 pounds. On the left side of the faceplate is a 1/4” headphone jack, and above that an IR receiver. (Weiss says that the headphone output stage is discrete.) Slightly off center is a color LCD touchscreen, and at right is a large knob for changing settings and turning the DAC501 on and off.

On the rear panel, at far left, is an IEC power inlet. In a row along the top are the analog outputs: balanced (XLR) and unbalanced (RCA), and in a row below them are the digital inputs, from left to right: AES/EBU (XLR), S/PDIF (RCA, TosLink), USB, and Ethernet.

The DAC501 comes in a finish of black or silver. The DAC502 is identical in function and operation, but is housed in a full-size case measuring 17.7”W x 2.6”H x 11.8”D, and with a second headphone jack on its rear panel.

Setup was fairly painless. I connected the DAC501 to my server and amp, then to my Wi-Fi router via Ethernet, and powered it up. A firmware update was needed -- I downloaded that and was off to the races.

The nice thing about the DAC501 is its user-selectable DSP modes, which can be adjusted through a Web interface that allows the user comprehensive control over this functionality. Its five-band Room Equalizer can be used to suppress room modes to improve bass reproduction. The Creative Equalizer is basically a three-band tone control with separate boosts/cuts of the high, mid, and low range, to improve the sound of poorly recorded music. De-Essing automatically improves too-prominent sibilance in human voices. Constant Volume adjusts the volume to a uniform setting across all tracks played -- a particularly useful function for playlists. The Vinyl Emulator is a processing mode that makes your digital recordings sound more like . . . well, like vinyl. Weiss states that this mode uses the “DMM-CD procedure offered by the Stockfisch label” to accomplish this goal. Crosstalk Cancellation (XTC) and Out of Head Localization are primarily for headphone listening and binaural recordings.

Some of these modes were still in development as I prepared this review, but I played around with what was available. While I enjoyed them all, I always kept coming back to the default setup. The DAC501 seemed to get the important things right from the get-go -- and while the flexibility of these modes is nice to have, it’s really the user’s taste that will determine which mode, if any, is used. The most useful mode for me was for adjusting for the distance between my listening position and the speakers -- but given the smallness of my current, temporary listening room, I couldn’t take full advantage of its capabilities.

Although the DAC501 does not yet support Roon, MQA, or Apple AirPlay, they’re being considered for future implementation.

My review sample of the DAC501 was already well traveled, so I assumed no break-in period was necessary. I listened to PCM and DSD files from my server, plus files streamed from Tidal and Qobuz.

Given the smallness of my current listening room, soundstages were suitably deep and wide, if perhaps not quite as deep as I experienced during the listening for my last review, of the Gryphon Audio Designs Diablo 120 integrated amplifier-DAC. Nonetheless, spaces were well defined, with good reverberation and accurate decay.

My tonal preference in reproduced sound leans toward the warm side of neutral -- my Jeff Rowland Design Group Concentra integrated amplifier has a warm, tube-like sound. Ordinarily, I’d have thought that any more warmth would be too much of a good thing, but when it turned out that the Weiss DAC501 made my system sound even warmer, I found it actually quite appealing. The DAC501 interacted synergistically with the Concentra -- the sound was harmonically right, without excessive richness or any smoothing over of transients.

This aural warmth inspired me to begin with a series of recordings of jazz piano trios, which I felt might play to the strengths of the DAC501. A favorite, Charlie Haden’s The Montréal Tapes (16-bit/44.1kHz FLAC, Universal/Tidal), had a relaxed, quiet, Sunday-morning feel to it -- not laid-back, but with a smoothness and liquidity that suited this concert performance. During Haden’s solo in Gary Peacock’s “Vignette,” Gonzalo Rubalcaba’s quietly probing piano provides a subtle undercurrent that the DAC501 spotlighted without overshadowing Haden’s double bass. In the next track, Haden’s own “Bay City,” the DAC501 showcased Rubalcaba’s fluid solo runs, and allowed Haden’s bass and Paul Motian’s drums to provide solid rhythmic counterpunch without overwhelming the piano.

Epic prog rock may not be everyone’s cup of tea, but I’ve gotten back into it in the last year or two, and wanted to hear just how well the DAC501 would handle “Supper’s Ready,” from Genesis’s live album Seconds Out (16/44.1 FLAC, EMI/Tidal). While the relative vocal merits of Peter Gabriel and Phil Collins are up for debate, I have no doubt that this live version of the song is in most ways better than the studio recording on Foxtrot. Guitarist Steve Hackett departed the band after this concert but before the release of Seconds Out, and his guitar contributions, though audible, were deliberately reduced in volume. Regardless, his soaring, ethereal guitar leads are a hallmark of “Supper’s Ready,” and were well rendered by the DAC501, even in the quietest passages. 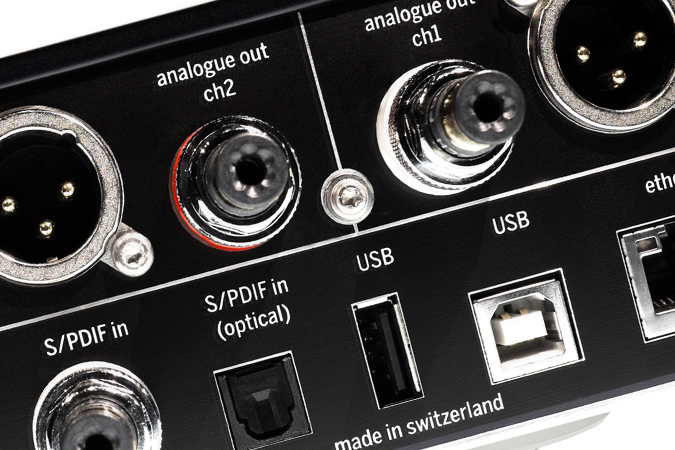 Raised in rural southwest Michigan in the 1970s and ’80s, I grew up on a steady diet of what’s now called classic rock, and like many aging baby boomers, I feel that current trends in music have left me behind. So it was with great surprise that I discovered -- in, of all places, an article in the Wall Street Journal -- the band Greta Van Fleet. Led Zeppelin was an obvious influence on their music, but this exciting young quartet from Frankenmuth, Michigan, three of whom are brothers, is by no means derivative, with its own distinct stamp on the music. “Highway Tune,” from their EP From the Fires 16/44.1 FLAC, Republic/Virgin/Tidal), sounds just like its title. With scorching lead guitars and a crunching backbeat, this furious and fast-paced rock could, through a lesser DAC, easily become sonic hash. Through the DAC501, every line and lick was well delineated against the wall of sound.

Just for kicks, I listened to some compressed music from YouTube. I subscribe to the Frog Leap Studios channel, another find courtesy the Wall Street Journal. The channel’s mastermind, Leo Moracchioli, is a Norwegian guitarist, bassist, and drummer who’s gone viral with music videos of himself, sometimes with guests, playing heavy-metal covers of pop tunes. Even if you’re not a metalhead, I highly recommend checking him out. He’s very clever, doesn’t take himself too seriously, his videos are hugely entertaining, and he even sells high-resolution downloads. I can put up with compressed streams over headphones, but through speakers they sound too dynamically squashed, with greatly shrunk soundstages. That said, with the DAC501 I found myself paying less attention to these deficiencies and more time just rockin’ out. It got the best out of the source material. 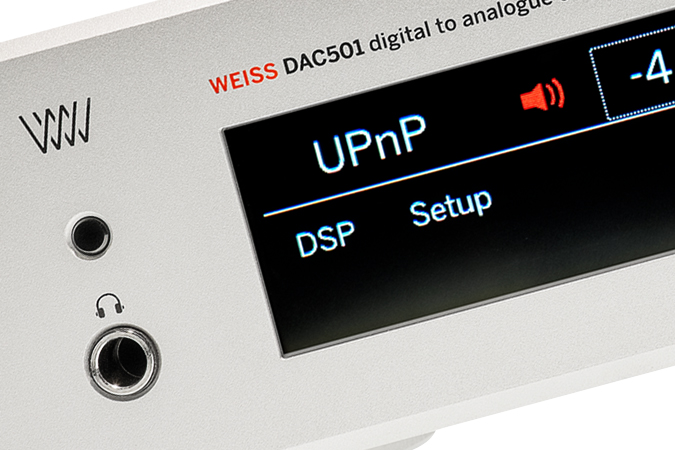 Using the DAC501’s headphone amp was simple as pie, and great for early-morning or late-night listening. I found myself favoring classical music and jazz, but feel that that was more of a listening-mood thing, not because the DAC501 favored those genres over others. Regardless, the DAC501 drove my 14-year-old Sennheiser HD 600 headphones with authority, providing deep, resonant bass that was taut, with no overhang. Through the HD 600s, the DAC501’s added warmth felt much more like the class-A, balanced sound of my Oppo HA-1 DAC-headphone amp ($1199, discontinued).

I found the DAC501’s Crosstalk Cancellation DSP mode worth having. My previous, underwhelming experience with other headphone amps had made me skeptical of such features, which have offered only subtle changes. But when I listened to “Bittersweet Symphony,” from The Verve’s Urban Hymns (16/44.1 FLAC, Virgin/Tidal), while switching between Bypass and Enable, there was nothing at all subtle about the difference. This mode made a huge improvement, opening up the soundfield while increasing the sense of space.

Oppo’s HA-1 DAC-headphone amp is no longer being made, but it and my Meitner MA-1 DAC ($7000) still get a lot of use at my place. I’ve said before that DAC technology has gotten so consistently good that it’s become very difficult for me to differentiate among varying products. Not so with the Weiss DAC501.

Sounding warmer than both of my DACs, the DAC501 it didn’t leave me feeling that its sound was too warm, or that either of my DACs was too cool. This warmth didn’t sound like a blatant coloration, just a subtle characteristic that served the music. Whenever I evaluate a DAC, the qualities I most focus on are high-frequency sounds. If a DAC can’t get those right, it’s not very enjoyable. But too much warmth will remind me of single-ended triode amps driving horn speakers, which is a sound that is not to my taste.

The great thing about the DAC501 is that, while it sounded warmer than my current system, and warmer than I’d typically seek out, not only did I quickly acclimate to its sound, I found that I enjoyed it beyond my expectations. I didn’t find myself longing for either of my other DACs.

I very much enjoyed my time with Weiss Engineering’s DAC501. Its price puts it in the range of my Meitner MA-1, but with the headphone amp features found in my Oppo HA-1. Add in its various DSP modes, and it’s an easy recommendation. Check it out -- you won’t regret it.