The Omega Man and the Audience Forte f3 powerChord

Written by Jason Thorpe
Category: For the Record
Created: 01 April 2021

During the long, grinding lockdown here in Canada, so many have had and still have it way worse than our family. All four of us (including the dog) are healthy, and Marcia and I remain gainfully employed. I thank our lucky stars that we’ve been, so far, unaffected by anything other than boredom and monotony. All I have to gripe about are the first-world problems of the affluent.

For example: COVID-19 has cut into my record shopping. As a stocking-stuffer, Marcia and little Toni bought me a gift card from Pop Music, a record store just up the street from us here in east-end Toronto’s Little Chinatown, within easy walking distance for this city dweller. Used to be I could stroll up to Pop, flip records, have a nice chat with proprietor Derek Antonio, and walk out with a couple of albums. After that, I’d get my hair cut at Galaxy Salon, then nip in to Rose’s Vietnamese Sandwiches for a spicy sub of assorted cold cuts. I had a route. A routine. 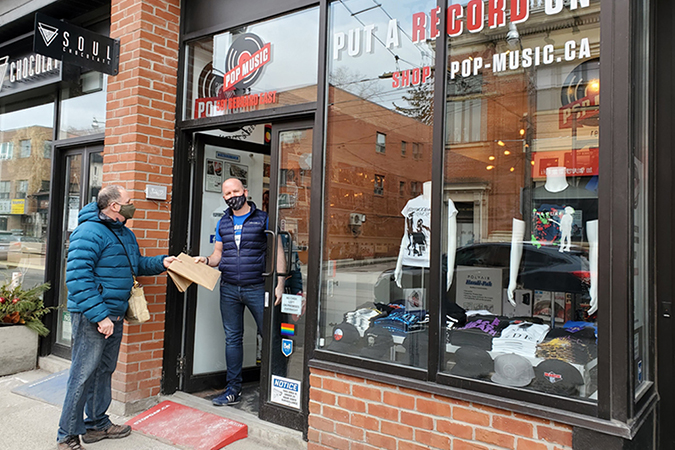 Now I sit home and talk to you guys. I feel like Charlton Heston in The Omega Man.

I’ve just added four records to my shopping cart on Pop Music’s website—after lunch, I’ll walk up there to pick them up curbside. Antonio says he’s doing quite well with Pop’s online business—he figures he’s doubled, if not close to tripled, his pre-COVID sales. It figures—what else is there to do but sit inside, listen to records, and wait to die?

Pop Music carries only new records, carefully selected by Antonio. The website, which he upgraded near the beginning of the lockdown, now has a far larger reach, with many more titles than could fit in the store; its main page presents a list of recommended albums, and the PM team tries to include a handwritten note with each order, thanking the customer and recommending additional albums of possible interest. And Antonio constantly scans the web for better-quality thumbnails and more informative bios for each album his site carries. He realizes that shopping for records in person is a social sport. “Record stores make neighborhoods,” he said to me as we chatted on the phone.

But right now, the thought of elbowing in to a bin in a crowded record store makes my skin crawl—it’s too much close contact too soon, given what we’ve experienced over the past year. Hopefully that will shortly change, and some sense of normality will return to our lives.

Still, I’m apprehensive about what’s to come. Will there still be a Pop Music storefront six months from now, when the COVID-19 vaccines should be widely available across Canada? Will Galaxy Salon tough it out or go under? Will Rose retire? When all of this is over, that short stretch of Little Chinatown could look awfully bleak. Antonio swears that his bricks-and-mortar shop is part of the genetic makeup of Pop Music, and while a suburban storage unit might work well enough for his online-only business, it’s not where he wants to go. In fact, he told me, he’s on the lookout for a home that would support a larger retail presence.

In my last column I told you about my positive experience with Audience’s top-model power cord, the frontRow powerChord. You may recall that I evaluated the frontRow only as used with my VPI Prime Signature turntable. Well, when Audience sent me the frontRow, they also sent me a sample of their entry-level powerChord, the Forte f3—they felt it might be instructive for me to listen to what they could do by dividing the frontRow’s price by three, then lopping a zero off the quotient and subtracting another $34. In plain numbers: the frontRow costs $6700, the Forte f3 $199, each price for a 6ʹ cord (all prices USD). 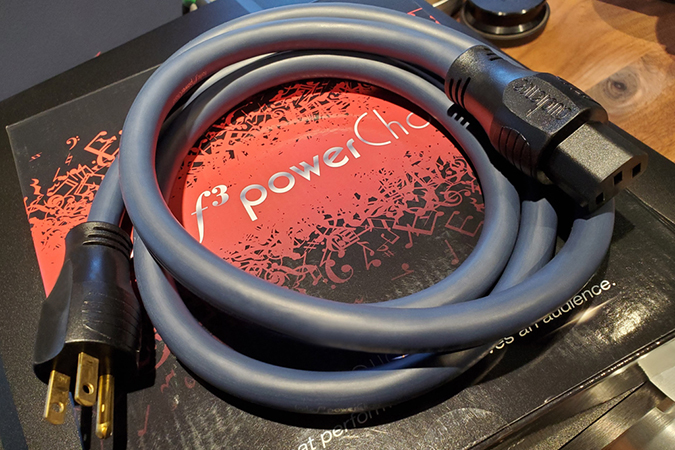 Unlike the frontRow, The Forte f3 has no rhodium plating or slick mesh stocking, yet $199 still gets you a big chunk o’ cord that includes a 10AWG conductor of “high-purity stranded copper.” The Forte f3’s geometry is a proprietary design that, Audience claims, “rejects noise while balancing energy flow for lowest eddy current resistance.” The brass contacts are cryogenically treated.

The Forte f3 is extremely flexible for its thickness. I had no trouble running it parallel to the frontRow cord, so that I could easily swap them in and out. As with the frontRow, I used the Forte f3 only to drive the motor of my VPI Prime Signature because, as I said in that last installment of “For the Record,” I’ve found that the benefits of power cords are most audible when they’re feeding a record player. My previous turntable, the shoot-for-the-moon Pro-Ject RPM 10 Carbon, was—like the RPMs 9, 9.1, and 10 I owned before it—juiced by a wall-wart power supply, so for years I couldn’t enjoy the luxury of experimenting with aftermarket power cords. The VPI has changed that, and now I wonder how I overlooked this opportunity for so long. 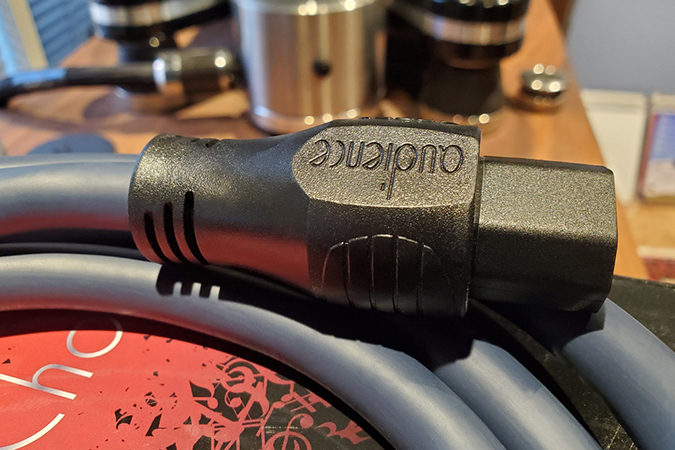 At any rate, it’s been instructive to hear improvements in the sound of an already great-sounding analog front end. There are lots of ways to tweak and optimize a turntable for best sound, but the motor’s power supply is a glaring facet of analog health.

Over the past few months, I’ve been listening to a pair of Klipsch’s Heritage La Scala AL5 speakers ($11,998/pair, review forthcoming on SoundStage! Hi-Fi). The 105dB-sensitive AL5s are absolute masters at reproducing dynamics. Piano, bass guitar, drums—any instrument that’s struck or plucked jumps out from these big, formidable speakers. The AL5s have transformed my system into a powerful aural microscope that I can use to focus on the types of changes wrought by any change in a turntable’s power supply.

So Audience’s frontRow powerChord delivered substantial benefits to my ’table’s sound. What about the Forte f3? 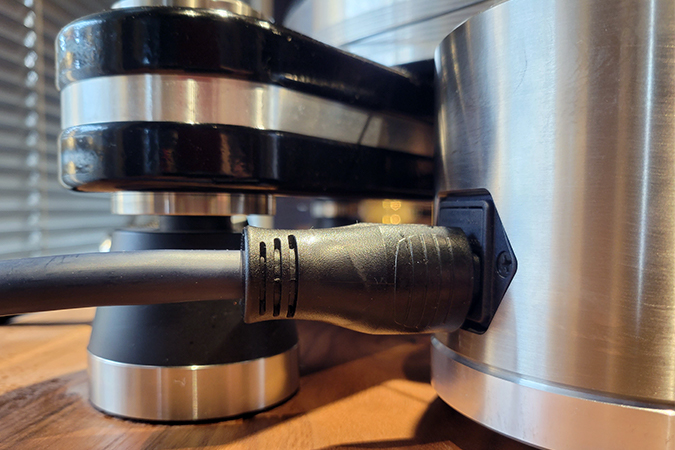 Turned out the Forte f3 delivered many of the same benefits that I gained when I switched to the frontRow from that vile black computer cord I was using on the VPI.

As with the frontRow compared to the VPI’s stock cord, I perceived no changes in tonal balance or anything frequency-specific. Swapping in the Forte f3 took away from drums a small amount of crispness and snap. Take the intro to “Vital Signs,” from Rush’s magnificent Moving Pictures (LP, Mercury/Anthem B0022380-01). There’s Neil Peart’s snappy, closed hi-hat intertwined with that ballistic, rapid-fire snare. I rarely listen to “Vital Signs”—usually, I lift the tonearm at the end of “The Camera Eye”—but with the Forte f3 plugged in I was captivated by Peart’s drumming, as I’d been with the frontRow. The quick start/stop of his hi-hat strokes accompanied by his back-beat fills was brought into clear relief by the addition of the frontRow cord. Just a tiny bit less obvious was the contribution of the Forte f3, but still there’s a family resemblance to the sound.

Listening to the vivid, rich algae bloom that is Howe Gelb’s The Coincidentalist (LP, New West NW 5079), I could hear the effects on his voice in “Unforgivable.” It has a fair bit of overhang in the lower midrange, especially through the roast-beefy La Scalas, which in my room produce a bit of a node right in the middle of Gelb’s vocal range. The frontRow cord somewhat ameliorated that overt vocal obesity by enhancing his sibilant attacks. The Forte f3, by contrast, lost some of its grip on Gelb’s voice, giving up some of the definition on those vocal highlights. 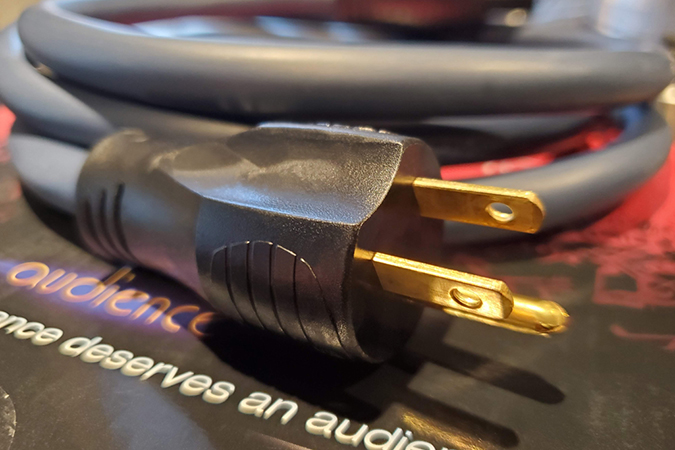 A quick swap over to the VPI’s thin stock cord, and I felt that the delineation of Gelb’s sibilants receded even further. Same with his piano, which sure as heck sounds like a slightly out-of-tune upright, as befits his playing-in-a-smoky-bar persona. Its plinkety-plink tone in “Vortexas” doesn’t sound anything like a grand. The stock cord homogenized the leading edges of the keystrokes, which slowed the sound and thus removed some of the rhythmic bounce that makes this song feel so homey and personal. Rhythm and swing—those qualities were what, for the most part, the Audience cords brought out in the VPI’s sound. Having done my due diligence with the VPI’s stock cord, I tossed it over my shoulder in the general direction of my cable graveyard.

Further listening to John Zorn and Masada’s Sanhedrin: Unreleased Studio Recordings 1994-1997 (LP, Tzadik TZ 6007) with the Forte f3 revealed more details. Joey Barron’s drum fills had better jump, each snap of his ride cymbal gaining in spatial delineation. There was more groove to the rhythm section. After listening to just this one album, I had zero desire to go searching for that discarded stock power cord.

These days, you can’t buy much in high-end audio for less than a grand. Sure, there are standout products for a couple hundred bucks—AudioQuest’s DragonFly DACs jump to mind—but a stone-cold, no-brainer upgrade to an already world-class analog front end for only $199 is hard to find. 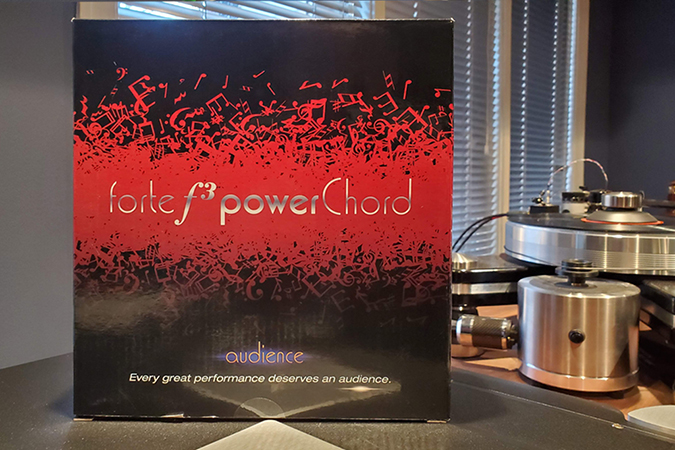 Yet here one is. If your turntable will accept an IEC cord, I strongly urge you to consider upgrading it to at least an Audience Forte f3 powerChord. And if you jumped out of that GameStop stock soon enough, I’m reasonably sure you’ll be even happier if you spring for a frontRow powerChord instead.

There are significant audible gains to be had with either. Highly recommended.