It's Field-Trip Time: Corby's Audio and the Kuzma Stabi R

Written by Jason Thorpe
Category: For the Record
Created: 01 September 2022

I don’t visit stereo stores very often. As a reviewer, gear ships to me, so I don’t need to scratch the itch to visit stores to see new stuff. Another reason is that, when I do walk into a store, I feel vaguely guilty. The salesman is trying to earn a living—he’s trying to sell product, and I’m most definitely not buying, so it seems wrong for me to take up his time.

Back in the late ’90s and early aughts, I lived just up the street from Applause Audio. Rob, the proprietor, was a great guy with whom to chat, and he sold records! So I was able to visit Applause and actually buy something, and it all seemed to work out for a while there. But I lost track of Rob and Applause after a couple of moves, and I became more curmudgeonly, insular, and lazy. So I figured that’s it for me and audio stores. I still frequent the nearby Pop Music record store, but that’s a different animal.

Just recently I got a tip from Doug Schneider, who has this way of dropping nuggets I just have to act on. “Call Don Corby. He’s the Canadian Kuzma distributor.” A terse message packed with potential. So some back-and-forth emails with Corby set the stage for this month’s little play. I arranged to pick up a review sample of a Kuzma Stabi R turntable ($8500, all prices USD) complete with 4Point 9 tonearm ($4700) and CAR-20 cartridge ($2000).

My GPS lady directed me to Corby’s Audio just outside Hamilton, Ontario, about an hour away from my home in Toronto. So on a bright Sunday morning, I headed off to visit my first audio store in well over a decade. 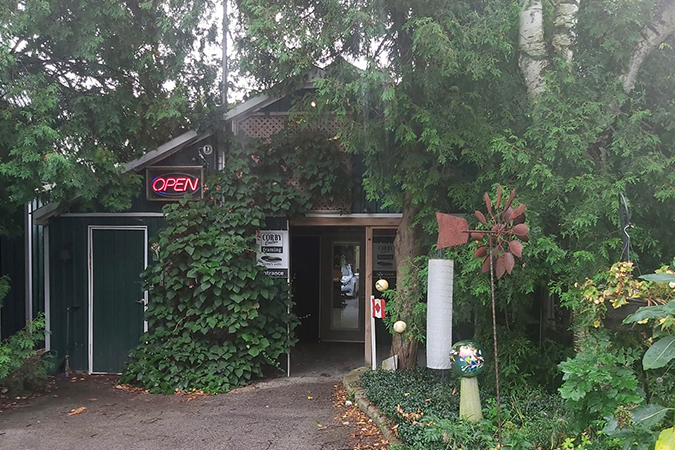 Corby has built himself quite an enterprise. Corby’s Audio has been in business for five years now, but his high-end picture-framing business—Corby Custom Framing—has been a going concern for 30 years, so the infrastructure for the audio side of things was already in place. Both businesses occupy their own sections of a huge steel barn, which also features an industrial freight elevator that Corby diverted from a scrap yard when it was decommissioned by a company where he was working as a maintenance engineer.

Corby’s Audio is housed on two floors of the barn and has three distinct showrooms. The product line is squarely planted in the analog world—a small sampling of Corby’s Audio’s product line features turntables from Kuzma, Clearaudio, Transrotor and Acoustic Signature, tonearms from Graham, Reed, and Ikeda, and cartridges from Charisma Audio, Etsuro Urushi, Dynavector, and Benz Micro. As I said earlier, Corby’s Audio distributes Kuzma products in Canada, as well as Allnic Audio tube amplification. Everywhere I went in the store, there were products I wanted to touch, buttons I wanted to push.

Corby took me upstairs, into the store’s main listening room, and as I walked in, I did one of those low intakes of breath that’s accompanied by a thin, quiet whistle. Facing me as I passed into the room was what I am fairly certain is the largest stereo system I’ve ever seen. 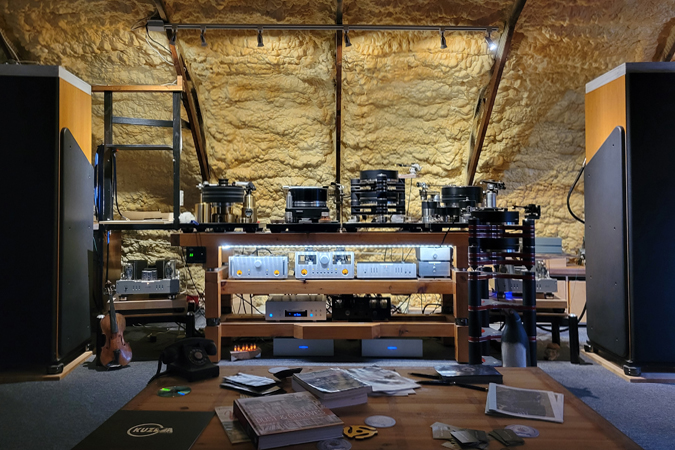 Now, this sport isn’t about size. It’s not about how many boxes you have, or how big your speakers are, right? You can build an incredibly satisfying system out of a pair of bookshelf speakers, a small integrated amp, and an even smaller DAC. Throw a grand at the problem, and you can end up with something that’ll stream incredible-sounding music. Right?

Sure you can. But when you throw an insane amount of money and time at the problem, you can also build a system that can destroy worlds. And that’s what Corby has done here. The speakers alone convey that impression—you could bury two people in one of those cabinets. 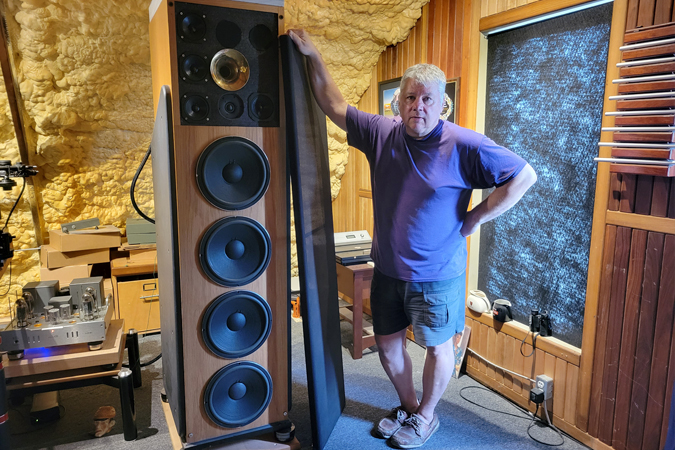 About the speakers: they’re a one-off design, made by Corby himself. The cabinets are made from two layers of 1″ MDF, and they each house—count ’em—four 12″ JBL woofers, four 5″ JBL midranges, one JBL compression upper-midrange, and a Scan-Speak Revelator tweeter. The crossover is a transformer-based, constant-impedance implementation that was custom designed by Kang Su Park of Allnic Audio.

There’s an equal sense of majesty about the equipment rack, also built by Corby. It’s made from 100-year-old pine salvaged from a barn, and its span is sufficient to hold four turntables, each of which has the feel and scope of an offshore oil rig. Left to right in the photo below are a Kuzma Stabi XL DC, a highly modified Micro-Seiki RX-1500, a Clearaudio Master Innovation, and a heavily modified TW Acustic AC-3. The amplification is all by Allnic Audio. 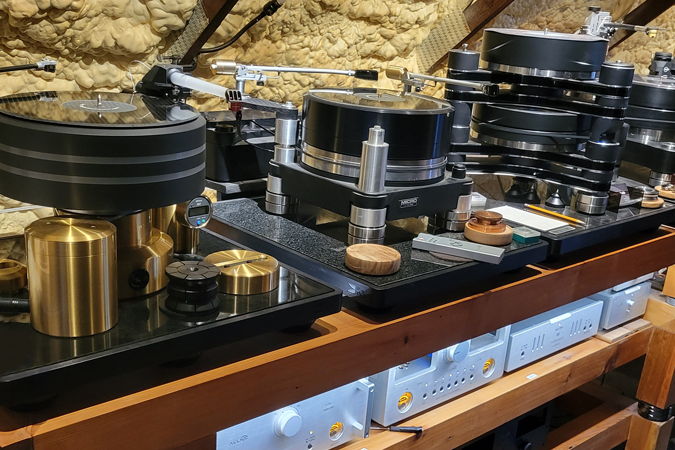 As the listening room is in the loft of the barn, the beams overhead were clearly visible. I was fascinated by the thick layer of spray-foam insulation, which—it seemed to me—provides optimum diffusion, and likely a fair bit of absorption. How, I wondered, could I sell my wife on the idea of applying this product to my listening room?

Corby sat me down in one of the womb-like home-theater recliners and cued up a record on the Kuzma. At this point, I was mentally readying a suite of platitudes, as I’ve heard big homemade speakers before, and they generally sound like a hot mess. Speaker design is part art and part science, with a heavy thumb on the science side of the scale. That Corby could build a pair of speakers with so many drivers, and have the result sound cohesive, would be a miracle, I found myself thinking.

Corby dropped the needle and my jaw also dropped. Steely Dan’s “Peg” leapt out at me with planet-smashing power. The volume wasn’t too loud, but it was pretty damn loud nonetheless. The bass was a physical force in the room, but it was tight with no overhang. The midrange was a touch forward, but only enough to add intimacy and realism, and the highs were crystalline and delicate. There was absolutely no sense of strain, either from the system or on my ears. My mouth began to water, quite literally, as if the system and its resultant music were pushing on a gland that provoked an autonomic response.

After the Steely Dan track, Corby asked if I had any requests, and I asked for King Crimson’s “Starless” from the album Red. While he dug the record out, we discovered that Corby and I were at the same King Crimson show back in October 1981, during the tour of their landmark album Discipline. So we’re practically related.

“Starless” was equally revelatory, with Corby’s system meting out this complicated, demanding music with a feeling of effortless scale. After much utterly sincere oohing and ahhing, we got down to business, and Corby led me over to the substantial boxes containing the Kuzma Stabi R and 4Point 9 tonearm. Corby pushed the boxes into the freight elevator and sent them downstairs. We met the boxes at the bottom, loaded them into my car, and after profusely thanking him for his hospitality, I went on my way. 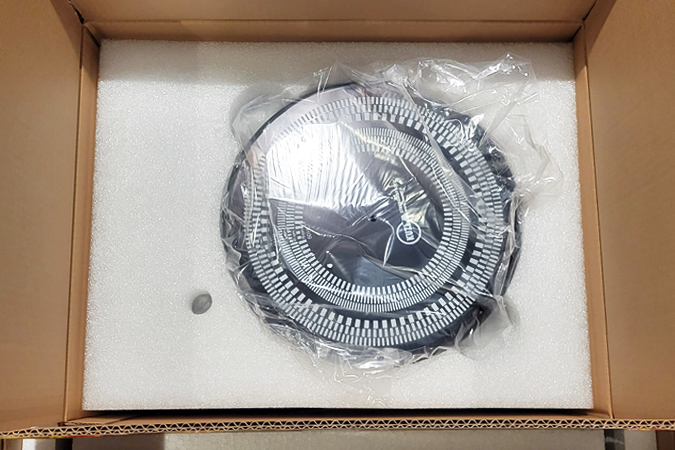 I had to invoke the help of a neighbor to drag the Stabi R’s box into the house. The Kuzma Stabi R comes solidly double boxed, and the layout of the attendant parts is logical, making them fairly easy to decant. The first supercool extra I encountered was a nice, solid stroboscopic disc that works great, even with my LED pot lights. It also makes a nice platter protector to keep the dust off between listening sessions. 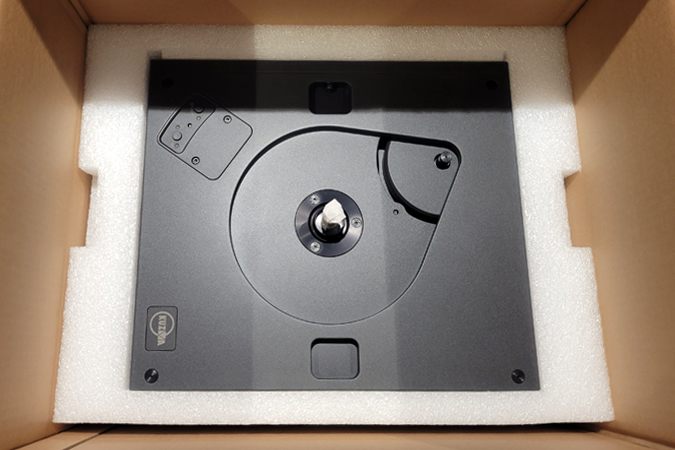 Assembly was fairly straightforward. This is a seriously heavy turntable, weighing in at a total of 80 pounds, so I made certain to engage my core while deadlifting the substantial main chassis onto my rack. 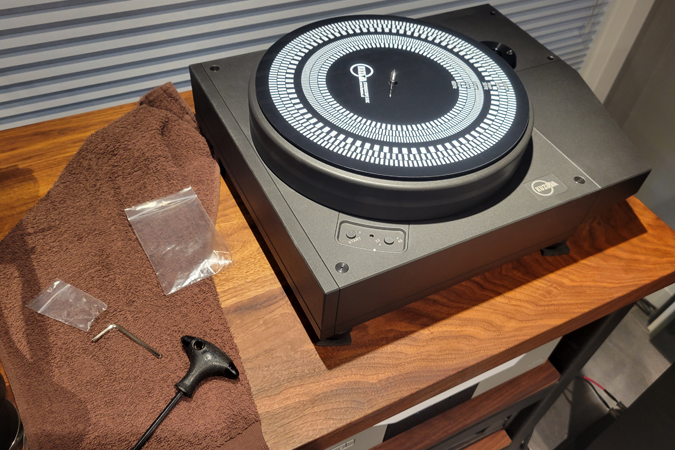 So, main chassis, sub-platter, and then platter. The bearing itself is built into a massive structure with an oil reservoir, and it appears to be self-lubricating. The machining tolerances for the ’table, sub-platter, and platter are superb. The trickiest part of the assembly was holding the wing on the right side while screwing the attendant bolts in to hold it in place. A second set of hands is suggested for this process. 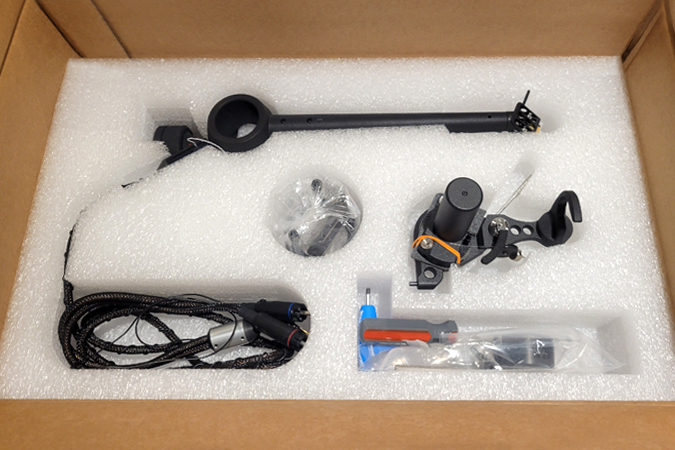 The 4Point 9 arm is a piece of scale-model genius. Near as I could tell at assembly time, there’s actually three points of contact—the main unipivot-type spike up top that controls lateral movement and two other spikes down low that control vertical movement. It’s a unique form of bearing that appears like a stroke of counterintuitive brilliance when you get your nose in there, but dissolves into confusion once you look away. I’m going to get hold of a good, solid technical description so I can explain this further in the forthcoming review that will be published on SoundStage! Hi-Fi. 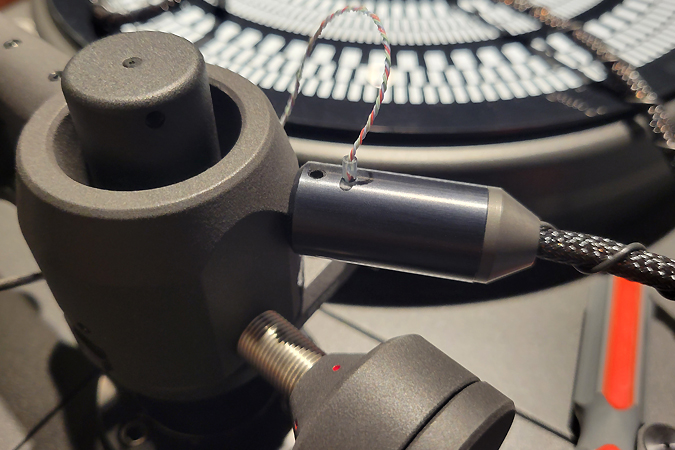 Continuing with the 4Point 9’s attention to detail, the captured tonearm wire is terminated with a lug and that lug is attached for transport via a set screw to a stud on the arm’s main bearing. After installing the arm, I carefully loosened the set screw and reattached the lug to the arm base. 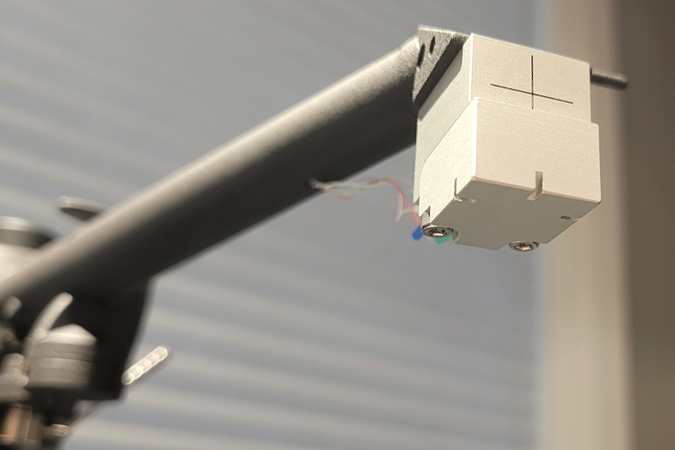 In my reviews of cartridges, I grumble about those that don’t come with a stylus guard and heap praise on those that do. I’m not sure how to approach the guard that comes on the CAR-20 cartridge as it’s just so ridiculously overbuilt. 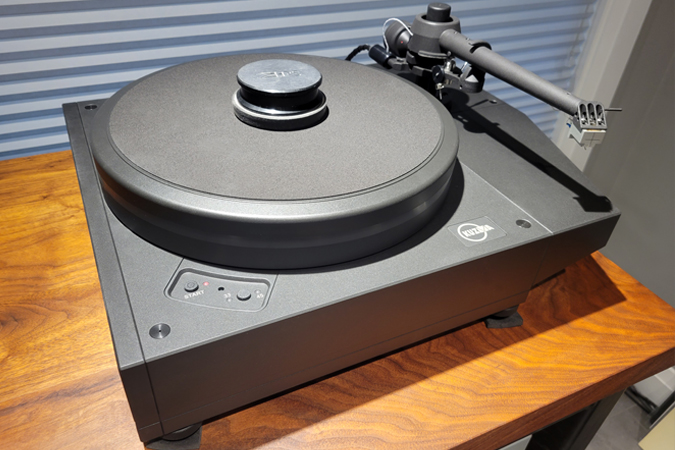 It’s got a stylus guard, so that’s good. But it’s made from the same billet aluminum as the cartridge itself, and, when secured by the hex bolts, it almost seems as if it’s one piece—an Indiana Jones sarcophagus. It’s total overkill, really, but that said, it’s a magnificent piece of engineering, as is the rest of this substantial turntable and tonearm.

I discovered a bunch more clever little engineering details as I decanted and set up the Kuzma Stabi R, but I’m going to save them for the review. Stay tuned.