A Death in the Family -- and Record Cleaning with Revolv

Written by Jason Thorpe
Category: For the Record
Created: 01 May 2019

Last February, my mother died. Her passing wasn’t unexpected -- she was 84 and not in good health. Still, it took me by surprise, and shook me up far more than I’d anticipated. The two years and more that I’d had to prepare myself didn’t mean squat. I’d thought I was ready, but -- there was no way to be ready for the death of my last remaining parent.

We’re all circling the drain. Eventually, everyone dies. One day, it’ll likely be my own child who finds me on the floor. 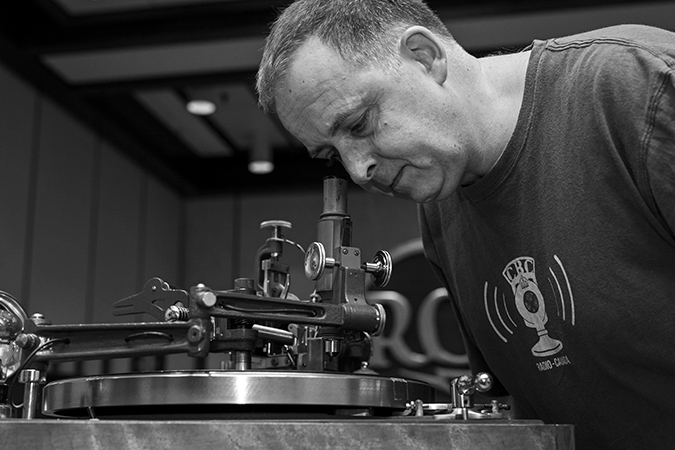 I’m not trying to harsh your mellow, but to set the scene for how my turntable has helped me through this rough patch.

I’m a secular Jew -- I like to tell people I’m Jew-ish. That means I don’t eat anything with pork in its name (bacon is OK, though), and I light a candle on a couple days each year. My mother was of a similar bent. We muddled our way through the Jewish holidays.

But the Jew part of our heritage mandated a Jewish burial, followed by three days of sitting shivah. We Jews bury our dead as quickly as possible (think: desert heat), usually within 24 hours of death. The ritual period of mourning -- shivah, which traditionally lasts seven days -- takes place after the burial, when friends gather around the bereaved, supplying food, good company, and senses of community and continuity. So for three days, hordes of people cycled through our house: short bursts of visitors interspersed by periods of solitude that encouraged deep introspection.

While it may seem shallow of me, I found that much of my free alone time during shivah and the week or so afterward centered on my stereo. Music has always been a big part of my life.

The equipment I use to reproduce that music is also important. I’ve been alternating between the Pro-Ject RPM 10 Carbon and the VPI Prime Signature turntables, with either a Roksan Shiraz or Top Wing Blue Dragon cartridge, the signals from all combinations of this hardware feeding a Constellation Audio Revelation Andromeda phono stage (review forthcoming). This has given me the best sound I’ve ever had in my system. 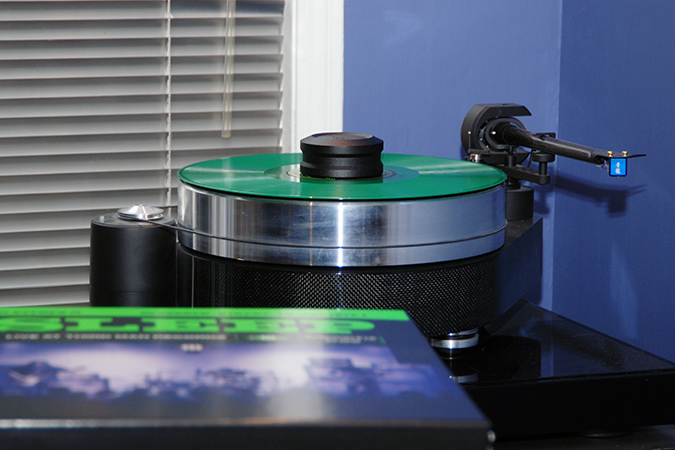 Now, with my world turned upside down, I found myself drawn to many of my most favorite records. In the midst of an event, and my own responses to that event, over neither of which I had any control, listening to music imposed some sort of order:

Get up from the sofa. Dig out an album. Inspect it. Dirty? Take the few steps over to the VPI Cyclone record cleaner and give it a wet wash. Back to the ’table. Push the Little Fwend tonearm lift to the ready position. Move the tonearm over the record. Lower it. Back to the sofa, to sit and ponder another 20 minutes.

l also filled time by reshelving some of the overflowing stack of LPs I’d pulled from my rack in the last few months, filed last name first for artists, but by first letter of the band’s name: Jethro Tull is filed under J ’cause he’s not a real person. (Well, he was, but he was never a member of the band Ian Anderson named for him. Tull, inventor of the horse-drawn seed drill, died in England in 1741.) My rack, my rules. More order imposed on chaos. 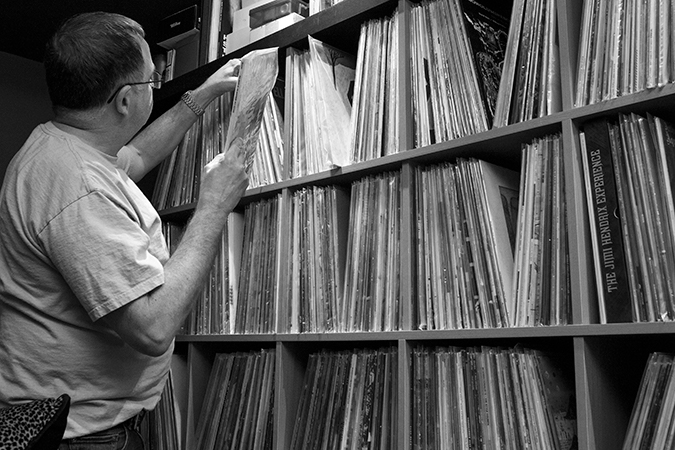 Three months later, my take on my behavior during this period of my life is that my system and the music I play on it are tightly wound up in my sense of self. Prior to my mother’s death, I’d have told you that the most important part of the music-gear equation was the music. Now I’m not so sure.

What’s the most important part of a library: the books as a collection? the words on the pages of those books? the building itself? If no one’s actually reading them, do the books have any intrinsic value at all? I think the answer to all four questions is an unequivocal yes. In a similar spirit, the things -- my system, my records -- have meaning to me beyond the music that’s contained in the grooves, but always with the Platonic ideal of my system as a tool with which to play music.

Thanks for bearing with me here -- I’m not a big fan of think pieces, but my reactions to this big event in my life have been boiling around in my mind for a couple of months now. I’ve found it hard to sit down, concentrate, and write, as I haven’t been able to focus on anything but the process and the music. Coalescing these thoughts into words on a page has helped me see why, and thus get my SoundStage! mojo back.

Not long ago, the folks at Vana, Ltd. sent me samples of their Revolv Supreme Clean record-cleaning fluid. It’s an alcohol-free formulation that comes ready to use, which is nice -- no mixing. Revolv Supreme Clean retails for a buck an ounce in the 32-oz bottle, a bit more in the 16- and 4-oz sizes -- but shipping’s a bitch. Win some, lose some. It’s available from Audio Advisor, Amazon, and many other retailers. 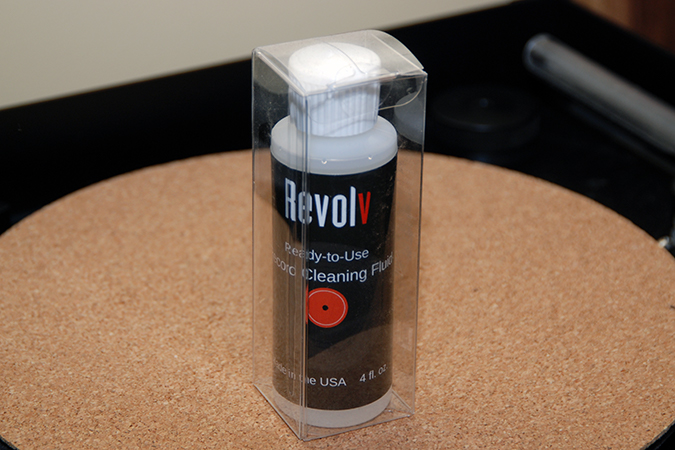 According to Vana, Revolv is designed to remove dust and associated detritus seated deep in the groove: dust mites, dust-mite shit, stuff like that. Vana provides little detail about what’s actually in the fluid, but do state that they employed a biology PhD to help them come up with the formula for this biodegradable detergent.

I first tried using Revolv Supreme Clean in the VPI Cyclone in much the way I use my own home brew of three parts distilled water to one part alcohol: pour it on the record surface, scrub four revolutions clockwise, four anti-clockwise, then vacuum it off. Perhaps its lack of alcohol makes Revolv’s cleaning action slightly less aggressive than my alcohol solution -- I found that, used this way, Revolv didn’t remove fingerprints quite as well. I then tried applying Revolv, scrubbing a bit, then leaving the fluid to sink in for a minute or so.

I was on to something. Given a little bit of time to dig in, Revolv seemed to better attack visible stains and marks.

A fussy guy in some ways, I followed up the Revolv cleaning with another spin in the VPI Cyclone, this time using only distilled water. I do this after using my home brew, to flush away the alcohol and surfactant (Kodak Photo-Flo), and it seemed a good idea to use it after a Revolv cleaning as well, to remove any detergent still in the groove.

Trying to compare the efficacies of different record-cleaning techniques and fluids is bike-shedding wankery. There’s no real way to perform A/B comparisons: Once a record has been cleaned, it’s clean. You can’t go back to its pre-cleaned state and try a different fluid. 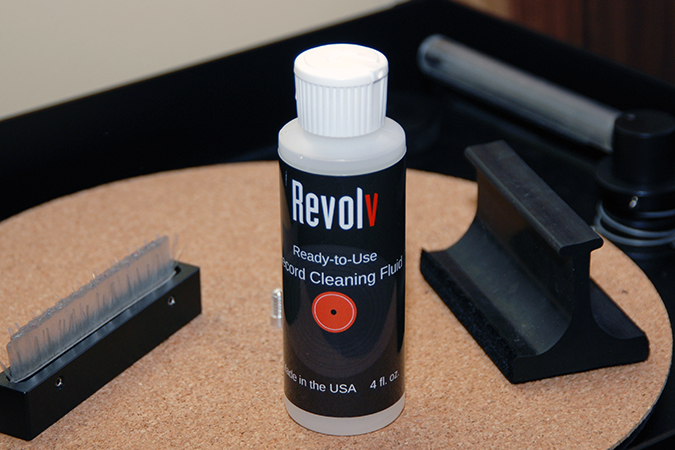 Be it a simple Spin-Clean bath, a tried-and-true VPI vacuum machine, or a flavor-of-the-moment ultrasonic cleaner, any method of soaking, scrubbing, and drying a record is far better than playing it dirty. That said, Revolv Supreme Clean is good stuff. I found that, with that one-minute soak, it pulled off fingerprints and dust really well, and reduced low-frequency rumble, and high-pitched ticks and pops, better than did my home brew.

We tend to become entrenched in our regimes. Some folks avoid alcohol solutions for fear of damaging their vinyl, others aren’t fussed. Obviously, I’m in the latter camp, but I do feel that, all else being equal, it’s better to keep alcohol out of the mix unless absolutely necessary. I use my water-and-alcohol home brew because I’m cheap, because I have all the ingredients on hand, and because it works well.

But now, having both Revolv and my own mix on hand, I reach for Revolv every time.