This is intended as a companion piece to the review of Vinnie Rossi’s L2i Special Edition integrated amplifier.

In my 35th year on this pale blue dot, I’ve come to realize how little intrepidity courses through my veins. I have so little appetite for risk and uncertainty that my day job is effectively spent identifying and minimizing these variables. There’s value to this kind of mindset: stability, consistency, security. But this mindset is anathema to visionaries and creators. Unlike me, these individuals don’t see the here and now and wish only to protect and fortify it. Their gaze extends beyond the horizon and what is, to some potential reality of what could be. Vinnie Rossi is just such a person.

During a recent conversation, Vinnie told me that he grew up fascinated with technology. From age five onward, he loved taking apart electronics and trying to understand them. Unsurprisingly, Vinnie studied electrical engineering in college, and by the early 2000s found himself working at Lucent and Bell Labs, where he helped design test equipment for high-speed optics hardware. After work, he lurked around DIY audio forums, buying gear, opening it up, and experimenting with possible improvements. Far from just amateur tinkering, Vinnie was buying up full technical manuals for SACD players from Sony, Marantz, and Denon and modding these units. He was also fascinated by early class-D amps, particularly Tripath’s “Class-T” modules. “They sounded almost like single-ended triodes,” he said. “I decided, ‘I’m going to put one of these in my own box.’” “What about tubes?” I asked. “I was always into tubes,” he replied. “I did SET, my own Frankenstein-like projects. I was drawn to the sound, I enjoyed it.” And so, in 2004, with $10,000 saved, he bailed on his cushy corporate engineering gig and started Red Wine Audio at age 24. 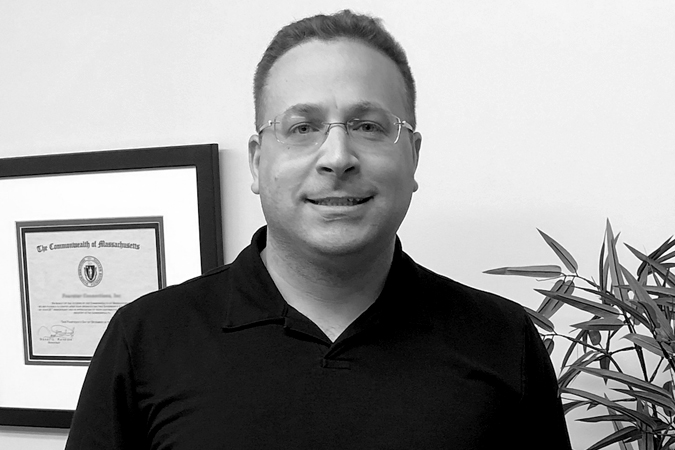 “I charged $500 for a little integrated with a lead-acid battery in a bare-bones enclosure,” Rossi said. “I survived the first year and was sending out products for review [without much of a plan].” He made sure to emphasize one of the foundational elements of his business: “Take care of the customers at all costs.” After surviving the crucial first year, he began to chart his own course with an “à la carte, sushi-style menu.” Buyers could spec their Red Wine Audio integrated amp with this capacitor or that, one input or many, starting at $500 up to $1500. Dual-mono with a dedicated battery in each channel? No problem. “I started realizing I could do all this customization,” he said. His product stack evolved, with tubed input stages entering the fray, in addition to improved, longer life batteries of the lithium-iron-phosphate variety. He laughed as he recalled audiophiles confusing his company, a play on both his name and the Italian form of “red wine”—vini rossi—with Mark Levinson’s second act, Red Rose Audio. And so, ten years on from shipping his first product, Signor Rossi’s company became Vinnie Rossi.

The headline product was the LIO, a return to Rossi’s spec-your-own box from his early days. In this instance, $2995 bought you an aluminum chassis, ultracapacitor power supply, solid-aluminum remote, and some RCA outputs. From there customers could spec—at additional charge—a phono stage, solid-state linestage, tubed linestage, DAC, MOSFET-based amplifier, or headphone amp. The idea, a good one, was that the LIO could be a DAC, phono stage, headphone amp, integrated amp, or most any combination in between. The LIO was in production for five years and was a successful product for Vinnie Rossi, but it ultimately had some drawbacks. “Without making the box bigger, power was limited,” Rossi said. Generating 25Wpc into 8 ohms, and 45Wpc into a 4-ohm load, it’s hard to argue that the LIO was a powerhouse. “And the number of options were overwhelming for some potential buyers.”

Which brings us to Vinnie Rossi’s—the company and the man, I suppose—current product lineup: the L2 Signature preamplifier ($16,995), the L2 Signature monoblocks ($15,995 per pair), and L2 integrated amplifier ($13,995). The monoblock amplifiers aren’t particularly powerful, offering only 75Wpc into 8 ohms, but they counter by being fabulously wide-bandwidth (2Hz-250kHz ±0.5dB) and ultra-clean in terms of THD+N. Don’t be fooled into thinking Rossi is a measurements-first kind of audiophile, however. “First and foremost, it’s the sound,” he said. “If you’re into specs, pass on me.” Like so much in life, looks can be deceiving. Rossi isn’t so naive as to ship a product that measures like a dream but sounds suboptimal. We should all remember that musical truth lies somewhere between the orthodox camps of objectivism and subjectivism, and will remain there until the field of psychoacoustics is far better understood. 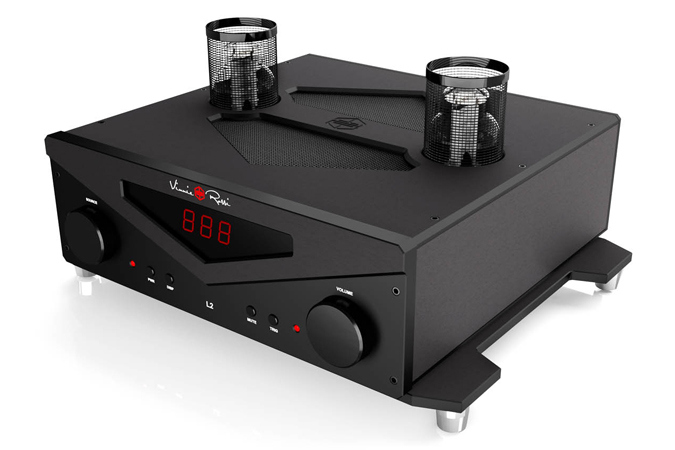 And that stance is refreshing from a boutique, high-end manufacturer. Rossi doesn’t give a toss about what anyone else in the industry is doing. His hi-fi interests and philosophy have driven him from being a side-hustle tinkerer to taking the enormous personal and financial risk of striking out on his own. Now, 16 years and three children later, he’s making the type of gear that, bluntly, no one else is making. “I try to do things my own way,” he said. “You’re not going to find these types of products anywhere else. I’m still doing things the big companies won’t touch because they aren’t suitable for mass manufacturing.” And that shows in his directly heated triode (DHT) L2 Signature preamplifier, which, at the flick of a switch, turns into a solid-state preamp using a class-A JFET stage.

The same goes for the optional DAC and Phono modules that can be added to the L2 Signature preamplifier and L2 integrated amplifier for $3495 each. Rossi uses off-the-shelf AKM chips in his DACs, but the input stage and reclocking circuits are his own architecture. The default filter is non-oversampling, which sounds better to him, and he offers only a single, minimum phase alternative. Preemptively addressing my next question, he said, “I don’t like the linear phase filters with their pre-ringing. It’s not natural.” Looking to do something unique with his optional phono board, he worked closely with Brian Lowe from Belleson. “We wanted no op-amps, four independent low-noise gain stages with adjustable gain, and a DC-coupled design with no caps in the signal path,” he said. Vinnie Rossi’s newest product is the L2i Signature Edition integrated amplifier, which effectively marries his standalone monoblocks and preamplifier into one chassis for $18,995. (The standard L2 integrated amplifier uses a simpler 6SN7 linestage, by contrast.) The DAC and phono stage modules may be optioned here, too.

Electronics aside, what’s most remarkable about Rossi is his perspective:

My goal has not been [making the company] bigger. I’m always thinking about how much better I can make the next product. It can’t just be the next version that’s better in only one way, the “Mark II.” Everything has to be better. Everything has to have multiple improvements. If the price goes up, it has to be better in multiple respects. With Red Wine [Audio] it was, “Why can’t I just make a plain black box?” I can’t do that anymore. I’m not satisfied enough. I have plenty of years ahead to improve and change that experience for the customer.

It’s not just about the audio circuits themselves, either. In early 2020 he moved his skunkworks into a larger facility that’s ISO 9001 certified. He talks at length about quality control, inventory management, lead times, logistics, handling, incoming, and shipping. He’s thoughtful about these topics, mindful that his continued growth and success hinge on managing a great many variables. It’s why he’s currently in the middle of writing an operational procedure for the assembly of his products, down to the torque specs on a screw-by-screw basis. This is not a man with an ADHD-like need for control for its own sake. Rather, he has a clear destination in his mind’s eye, and he knows that he must think through and understand every piece of his growing puzzle in order to get there. And as with any entrepreneurial creative, I suspect Rossi’s destination is not fixed. There will always be something to improve. 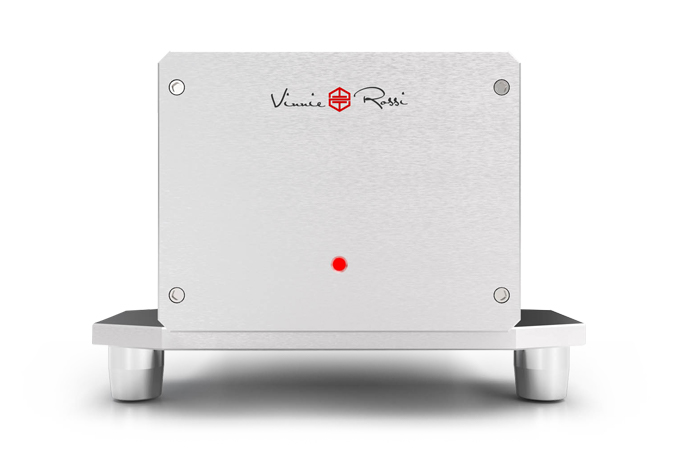 Perhaps most important to the New Englander, however, is his commitment to his customers. I’m not aware of another low-volume manufacturer that offers a ten-year warranty for its products. In the ultra-high-end, consumers often get less support for their sizeable cash outlay than if they’d spent a fraction as much with a larger, more sophisticated firm. “I have to be able to service these products,” he said. “I try to turn gear around quickly, ideally within a week. I answer customer questions. Everything is made here in Massachusetts, and I have full in-house control over everything. I’m actually the final QA tester for each and every unit that goes out, and I don’t think that’s going to change. If I lose control of that, my reputation suffers.” I like to think I have a pretty good nose for bullshit. And it was abundantly clear to me that it’s not in Rossi’s makeup to be anything other than direct and authentic. It showed when he said, “I run this like a hobby. I run my own gear day-in, day-out, always looking for the next improvement. But I try to have enough time to keep up with my family. It’s more important than growing my business.” Cheers to that.