Written by Hans Wetzel
Category: In Good Company
Created: 15 May 2021

This is intended as a companion piece to the review of Allnic Audio’s L-9000 OTL/OCL preamplifier.

Big things have small beginnings. Some beginnings, however, are smaller than others. For Allnic Audio founder Kang Su Park, the story begins in the South Korean countryside during the 1950s. “We were very poor,” he told me. The South Korea of his youth was a far cry from the technology-forward nation we know today. That’s not exactly a shock after the Korean War tore through the Korean Peninsula from 1950 to 1953, leaving a literal scar in the form of a demilitarized zone, and a figurative one that left South Korea with the unenviable task of rebuilding a nation from scratch.

“My two big brothers were electricians and engineers; this was very rare,” Park explained. “So from my childhood on their shoulders, I saw many things.” Music was always playing, the American influence lingering over the nation in the form of rock and roll, jazz, and big-band music playing over the radio. This was the soundtrack of Park’s youth. “We all enjoyed American music,” he told me. “I was a curious boy. In middle school, I built a small amplifier pack from my brother.” He enjoyed testing and fiddling with gear, something that stuck with him in the decades that followed. 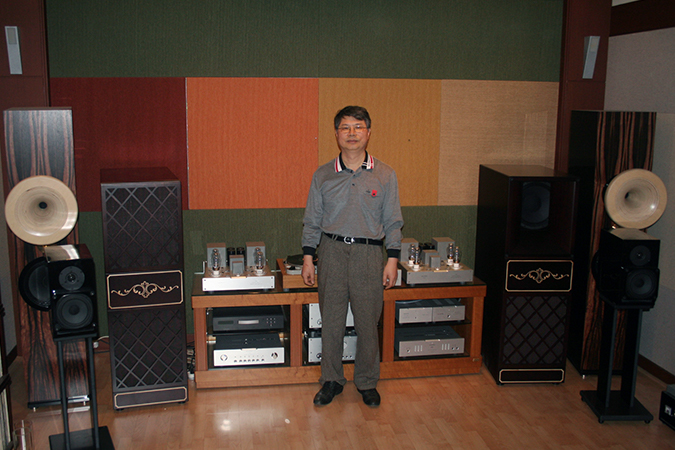 Despite his clear aptitude for electronics, Park explained that his parents didn’t want their third son following in the footsteps of his older brothers, so they pushed him into the liberal arts. “My university specialized in foreign languages, cultures, and affairs,” he said. “I studied French literature.” When I pressed him on whether he enjoyed it, he admitted he did. “It was good to have various experiences that enlarged my ideas and attitudes. It’s fortunate. I could have had a narrower vision in life. But I did not stop enjoying the music!” As you might expect, even during university he continued to tinker, experiment, and learn. “I made electronic gear on the side,” he told me. “I read books about electronics, [vacuum] tubes, and loudspeakers.” When I pressed on whether he rued being pushed into a vocation that wasn’t his passion, he conceded, “At the time, I thought it [would be] a lifetime hobby.”

Following university, he took a job at an export company, all the while dedicating his free time to studying the foreign audio gear that was starting to appear in the country. “In the 1970s and 1980s, German gear was very popular in Korea—Siemens, Telefunken.” He name-dropped American brands, too, like McIntosh Laboratory and Marantz. “There were many good men, geniuses, who devoted their lives to build good gear.” Park’s comments highlighted how deeply respectful and thoughtful he is. Were these personal or cultural qualities? I suspect both. From his brothers when he was young to those foreign brands and the great minds behind them, he made sure to credit others, a welcome trait in an industry where that’s not always the case. His message to me was unambiguous: He needed to learn everything he could before he would dare build something of his own design. To do otherwise would be arrogant at best, morally wrong at worst.

In the 1980s he moved with his wife to Gabon and Cameroon for work opportunities. “There was fraud, human crime,” he said. “I think it was hard. Many poor people suffering.” Park’s buoyant, glass-half-full presentation quickly turned philosophical. He explained that his family was one of around ten Korean families who had moved to Francophone Africa for work. After several years of managing a plant that manufactured backpacks and cheap electronics, among other things, he would be undone by the scourge of so many African republics recovering from more than 50 years of Western imperialist rule: corruption. Out of the blue, his banker called to tell him, “This country [Cameroon] is hell!” after he forged Park’s signature and emptied his bank accounts. With Park’s help, the banker would eventually go to prison, but the toll was immense. “I was so disappointed. It was so depressing, and it was very hard, so I quit the company. It was so, so bad for me. I worked very hard, and I lost everything.” It was 1990, and Park was only 34. “The legal system didn’t protect me,” he said. The dejection and the sheer weight of the story were still apparent all these years later. For Park, it was a betrayal of the ethics and values that are clearly so important to him: there’s a right way to do things and a right way to treat people. He’d reached a nadir.

Out of misfortune, however, sprang opportunity. Park returned to South Korea with his family in February 1990, and within months began a joint venture with his friend: an audio company. His very first project was to make an affordable volume attenuator, which would make its way into Silvaweld—the company’s name—amplifier kits. “They were budget, tube-based, and practical,” he recalled. The seven years that he spent working on Silvaweld were a crucial period that gave Park the experience and confidence to strike out on his own in 1997, following the amicable dissolution of the company so that his friend and partner could build computer monitors. 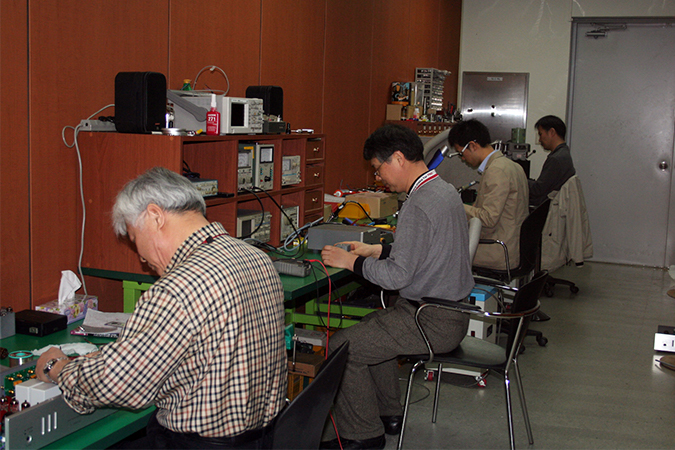 And so, in September of 1997, Allnic Audio began. “Without money I couldn’t make my dream come true. It was 100% my own power,” Park said. “But I was happy to be independent. I can realize my dream. I was so happy!” Park’s first product was an LCR-type phono preamplifier, and he explained that, at the time, Audio Note of Japan (now known as Kondo Audio Note, and not to be confused with the UK-based company of the same name) was the only manufacturer producing an LCR-based phono preamp, and it cost a whopping $75,000. By contrast, Allnic’s alternative design cost $3000. “I made it from the heaven to the Earth. I was happy because I wanted people to buy it [and to be able to afford it],” Park recalled. “I made a hit—it worked! I sold a lot, and I realized ‘There is a commercial venture here.’”

Park’s next product was a preamplifier. “Most tube preamplifiers [from the time] were transformer-coupled,” he explained. “But after the 1950s, it was costly and [the industry] went to a capacitor-coupled design. The transformer is very important, so I used a nickel core. It’s very good for audio use, but very expensive. It was high-bandwidth, and [I had] another hit here in Korea.” And there you have the provenance of the company’s name—Allnic, for the all-nickel transformer that Park utilizes in all of his electronics. By 2000, he started to export to Europe and the United States. Germany was the first country outside of South Korea that accepted his products, something he was very proud of, given his affinity for German gear. “It was a welcome reception!” he exclaimed. “They understand my philosophy.” 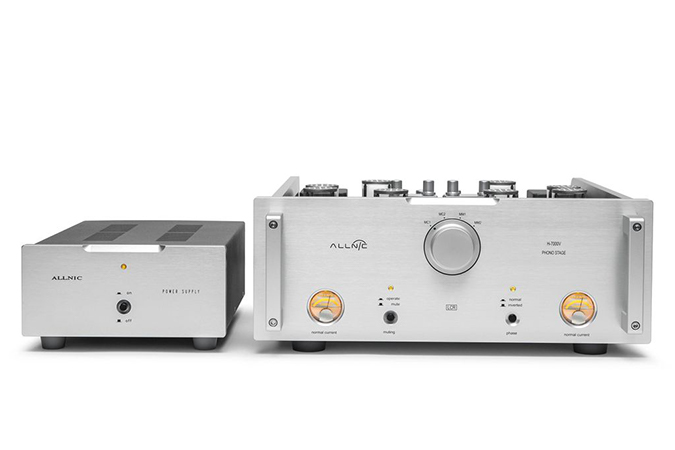 I pivoted from my questions about the past to ask about his audio philosophy. In his company’s current product lineup, which includes a variety of power amplifiers, preamplifiers, integrated amplifiers, phono stages, and cables, there’s a clear lean towards vacuum tubes. “Solid state is very strong for power amplifiers—big power and efficiency,” he explained. “But in my personal opinion, tube preamplifiers and phono stages are ideal from an engineering and a listening perspective. A transistor has bad linearity, [while] tubes are very linear.” His musical taste veers to classical, particularly Bach and Beethoven. His sons—one currently works in the business doing marketing, and the other likely will after he finishes his electrical engineering degree here in the United States—prefer K-pop, as it turns out. There’s also an unmistakable analog lean in his current product stack.

Our conversation meandered from topic to topic. He told me about his preamp designs and how some of them are both OTL (output transformer-less) and OCL (output capacitor-less) in execution. Park mentioned that he’s not a headphone guy, but he wanted to introduce one of the best headphone amps that consumers could buy, so he created an OTL/OCL unit—the HPA-5000XL. He wanted to make “the last” integrated amplifier, one that was “perfect.” He dislikes most volume controls, so he set out to create his own analog pot that was a constant-impedance attenuator. He spoke of peering under the hood of an extremely expensive European brand’s preamplifier a couple of years back and being appalled at the sight of a $20 volume control at its heart. 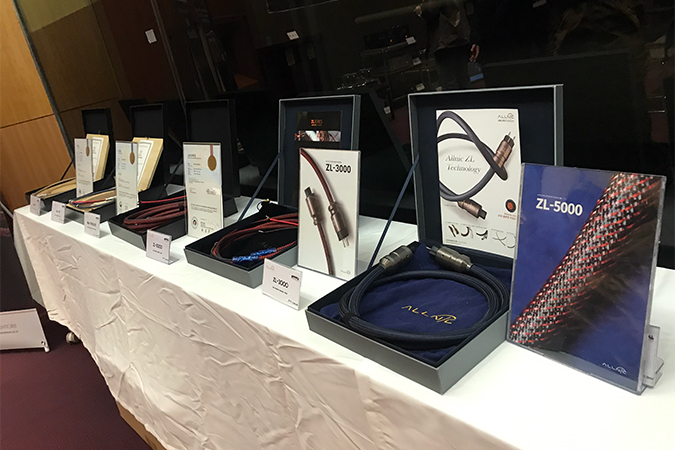 Park told me that he doesn’t necessarily want to be in the cable business, but he’s been disappointed to see other high-end cable manufacturers using all sorts of fancy conductors, only to terminate a cable with off-the-shelf terminals, and using solder (like tin or lead) in the signal chain. “What’s the point in having soldering or a screw or a bad contact at the terminals?” he said, clearly exasperated. “All [of our] terminals are made by us using beryllium copper, and I use 1000C welding—no soldering [between] the wire and the terminal.” He even told me that he’s starting to manufacture his own vacuum tubes after being disappointed in the quality control of existing options. Not just that, but he intends to make fundamental improvements to eliminate microphony and drive down distortion levels. K.S. Park is a man who doesn’t abide lazy engineering or weak quality control if it’s within his means to find an optimal alternative. He is, above all, a man of personal and technological principle. The best things in life arrive only after great effort—and often significant personal cost. For Park, he’s worked far too hard and far too long to deliver something fundamentally compromised to his customers. 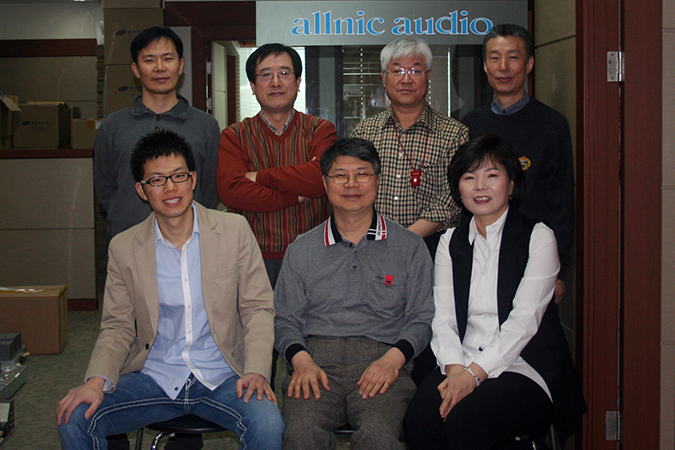 We concluded by talking about the broader industry, and I asked his opinion of the über high-end. Keep in mind that Park’s flagship designs top out at a not-insignificant $30,000 retail price. “This is the industry!” he told me. “It used to be a big industry, prosperous. But not now. The poor man cannot enjoy this hobby. This is for the wealthy. I don’t think that’s correct or right. I want my entry-level products to be affordable [and of high quality], and my flagship products as perfect as possible.” Park bears a clear sense of duty and responsibility when he talks about his creations. It’s not about money; it’s about creating something excellent for the money, and shortchanging consumers is not an option.

“I don’t want to cheat people or create a false illusion,” he said. “I just want my customer to enjoy the music.”