Most of my friends are not audiophiles. In other words, most of them don’t care all that much about the actual sound of the music they play in their homes. Or their cars. Or at the gym. They care about the music, of course, but the sound of it—whether it passes a certain threshold we’ll call, um, audible—is of little consequence to them.

Like many audiophiles, though, I enjoy projecting my sonic sensibilities onto my friends whenever the opportunity arises. Sometimes they embrace, or, uh, tolerate my suggestions. This is the story of me doing just that—ushering a friend into that rarified realm of refined music reproduction—about 25 years ago.

My buddy Robert and his family had moved into a new home equipped with a sizable finished room over the garage (FROG). At the time, Robert and his wife, Sue, didn’t have kids—or even a dog—but they did have all this newfound space to fill (they had started out in a small apartment). Like many new homeowners, Robert decided he wanted a music-and-home-theater system installed in the FROG. Unlike many new homeowners, he came to me for help. “I don’t want to go crazy like you do, but I do want something nice,” Robert announced. Ahem. Define crazy. 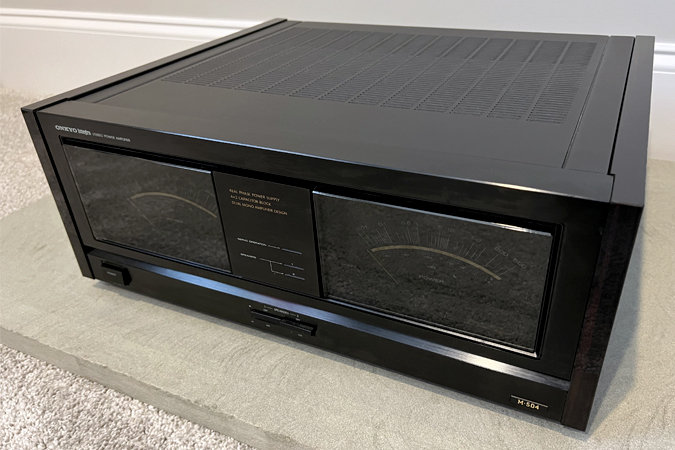 My memory of the exact chain of events is a little sketchy. What I do vividly recall is that I helped Robert assemble a pretty good system consisting of Outlaw electronics and some Hartley speakers (the company was local to us in Wilmington, NC)—sensible components all. The one luxury piece I did choose to add to Robert’s list of must-have items was an Onkyo Integra M-504 power amplifier. I can’t remember exactly what I came up with to sell Robert on the idea of buying this glorious Japanese stereo power amp (which was still a used product 25 years ago, but it wasn’t that far removed from a current model). I’m sure the spiel involved something along the lines of the Onkyo being built like a tank and having these beautiful green meters that would look soooo good in his FROG. 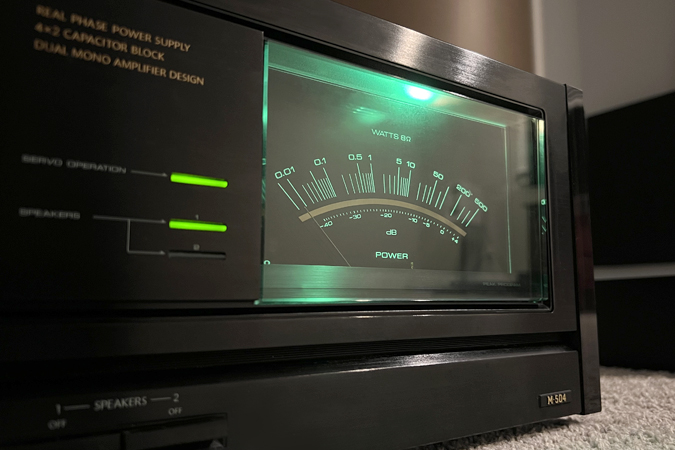 Long story short, Robert bought the amp and the rest of the gear I proposed, and it served him without a hiccup for roughly two decades. But all good things must come to an end. At some point about five years ago, Robert refurnished his FROG, and all of the old electronics had to go. The Onkyo M-504 got passed down to our buddy Pete who lived across town. I kind of lost track of all the gear after that, and, honestly, I’d forgotten about the Onkyo. Until . . . 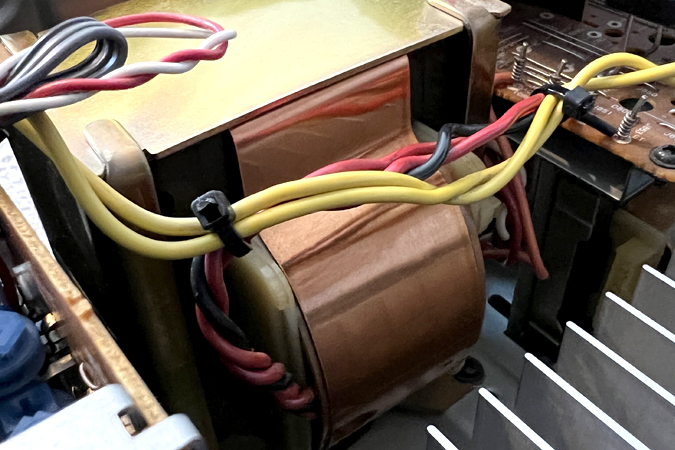 I was chatting with Pete the other day, and he mentioned having to clear out some old electronics that he wasn’t using. Lo and behold, the Onkyo was included in that list of no-longer-needed components bound for the scrapyard.

“Do you mind if I come over and get that old Onkyo from you?” I asked.

Pete would only take $100 for it, even though I told him it was worth more than that. But I assured Pete that I would do right by him and Robert if and when I sold it. Pete was skeptical that the old Onkyo collecting dust in his garage was worth even the bill I offered him. 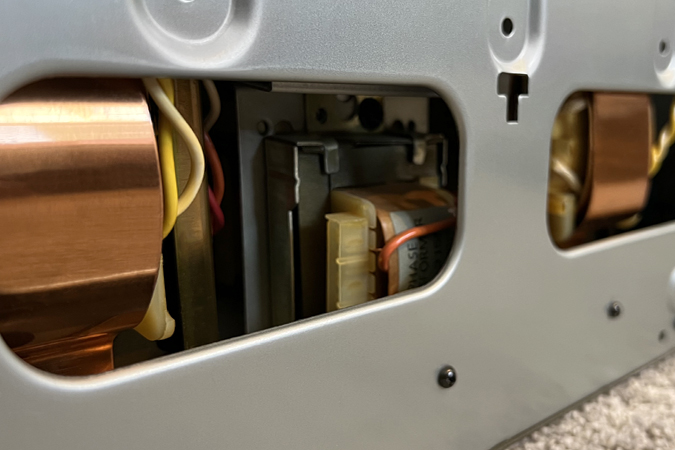 So I drove to Pete’s house, lugged the old Onkyo M-504 outside, and wedged it into the trunk of my Nissan 370Z convertible, secretly praying I’d actually be able to get it out again once I got home. The amp is big; the trunk is small. I did manage to heave the M-504 into my listening room without incident (or injury) and spent about a nostalgia-saturated half hour cleaning it up, reverently murmuring, “Wow, this thing is almost in mint condition.” I could not believe my eyes—the wood panels were free from flaws, and I couldn’t spot a single scratch on the face. Until I powered it up, that is. As fate would have it, one of the two power-output meters remained dark. A quick online search unearthed myriad M-504 owners replacing the original green bulbs with LEDs of various colors, including one guy who was shown changing the background color of his meters with a remote control. Bulbs only last for so long, so I guess I shouldn’t have been surprised by the burnt-out meter.

The Onkyo Integra M-504 stereo power amplifier ($900 USD when new) enjoyed a long—by today’s standards—manufacturing run that stretched from 1987 to 1997. It measures 18.3″ wide, 7.2″ high, and 16.6″ deep. It’s rated to output 165Wpc into 8 ohms and weighs a rugged 50 pounds. It sports dual meters on the front panel and has facilities to hook up two pairs of speakers, though the manual warns that if you do hook up four speakers, they need to be 8-ohm models (the M-504 is said to be stable into 4-ohm loads). 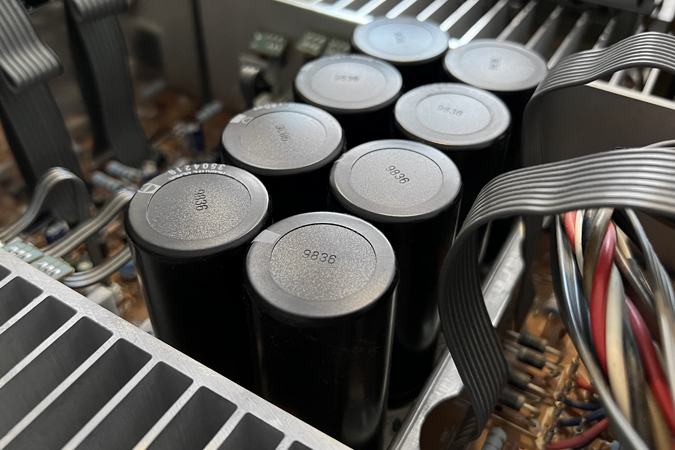 The M-504 has RCA inputs—no XLRs—and has an attached power cord. Inside there are two large transformers on the left side of the chassis arranged in a dual-mono configuration and, dead center, there’s an eight-pack of power-supply filter capacitors rated at 9900 microfarads each. The bolted-on, Rosewood-look side panels are glossy and dark—you’d never know these were vinyl-over-particle board if not for the sticker attached that says so. Overall the Integra M-504 is a beautiful power amplifier—classic and understated. Until those cool green power-output meters light up.

Into the system and listening, sorta

I had to give this puppy a listen, but there were a few logistical issues to tackle first. The M-504 only has RCA inputs, and my MSB Technology Discrete DAC is fitted solely with XLRs. Luckily, I still had a Hegel Music Systems HD30 digital-to-analog converter with integral volume control on hand that’s fitted with RCA outs. First problem solved. Onto the second problem: the binding posts on the Onkyo are not compatible with the spade lugs on the Shunyata Research speaker cables I use. So I went to the closet and dug out an old pair of generic cables with bare leads on each end. It was a bit of a workaround to get the M-504 into my system, but there you have it. I now had the Onkyo driving my reference Sonus Faber Maxima Amators. My sole source component was an Apple MacBook Air laptop running Roon and Audirvana and streaming music from Qobuz. 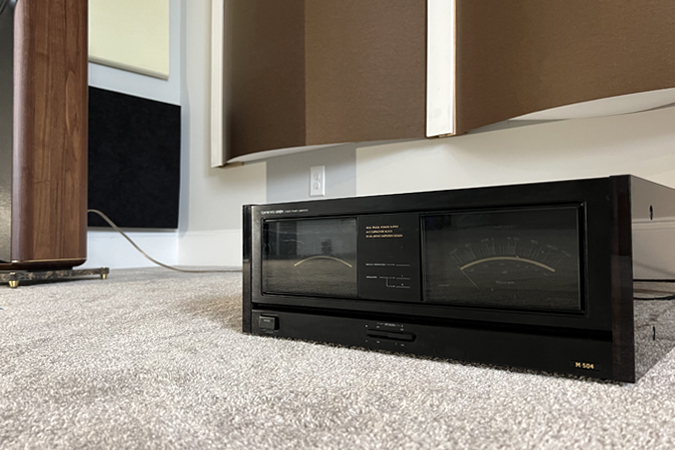 My listening session with the M-504 started off great. The mids were a little warmish, but they still had good clarity; the top end was detailed to a point but a touch laid back in absolute terms, and the bass was rounded and a touch soft. Overall it was a pleasant listen, though far from state of the art, or really even the equivalent of good affordable gear. Diana Krall, Lana Del Rey, Pink Floyd . . . it all sounded good, and I enjoyed what I heard until . . . crackle, pop, silence. The Onkyo died less than an hour into my first and only listening session. I unplugged it quickly, just in case there was something more explosive about to come—after all, I had to protect my SF speakers! But my brief encounter with the Onkyo’s sound caused me to wonder afterwards if what I’d heard was even close to representative of what this baby could do in a healthy state.

And so ended my time with one of Onkyo’s famous Integra amps.

Multiple models of Onkyo Integra power amplifiers were available in decades past. This article is not aimed at helping you sort out which of these you should be looking for if you’re in the market for a used one. I’m not a vintage Onkyo connoisseur by any stretch of the imagination. 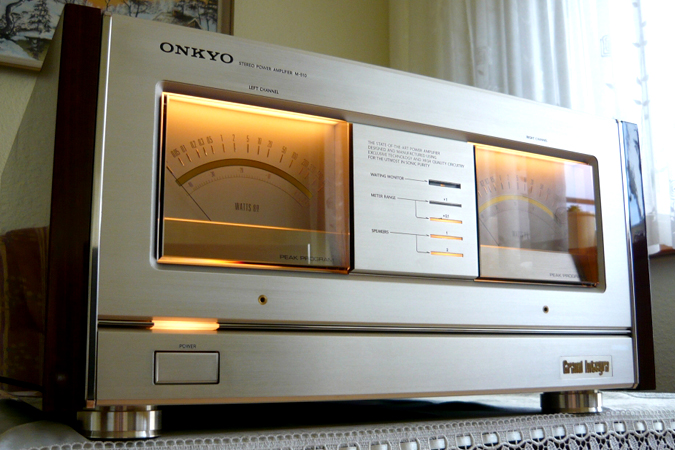 I do know, though, that the Integras weren’t truly representative of the best amps those Onkyo engineers were capable of. The top dog, from what I could gather researching vintage stereo websites, was a beast labeled the Grand Integra M-510. This limited-edition model was rated to output 300Wpc into 8 ohms and tipped the scales at a mammoth 140 pounds. It also featured dual power meters up front and wood side panels, though it still lacked balanced XLR inputs. From what I was able to find out online, this model is highly collectible today. Expect to shell out a good $10,000 or so for a Grand Integra M-510 that’s in excellent condition. Those looking for vintage amplifiers of all types should check out www.reverb.com.

So what to do with my almost-mint but non-functional M-504? Well, seeing as I’m only into it $100, it kind of makes sense to spend the several hundred dollars—that’s a guess—necessary to get it back up to snuff (M-504s go for about $1200 if they’re in similar condition to this one and operating to spec). If only for the nostalgia factor. I mean, it has been in my circle of friends for 25 years or so.

Or, I could sell it as is, let someone else do that work, and they’d end up with a dream amplifier capable of lasting probably another couple of decades while bathing its owner in the awesome glow of those green-lit meters. We’ll see. The experience has rekindled my love of vintage electronics. In fact, if you happen to spot a Grand Integra M-510 at a garage sale for a good price, shoot me an email. I’ll be right over.