Brooklyn-based indie band Savak has released five albums since 2016, including its newest, Human Error / Human Delight. The album was developed and recorded during the pandemic, and the band wrote and arranged the songs on Zoom. Currently, Savak consists of Sohrab Habibion and Michael Jaworski on guitars and vocals, with Matt Schulz on drums, so the trio pulled in a number of bass players to fill out the band.

The group’s past recordings have been a deft balance of punk-rock aggression and songwriting finesse. Human Error / Human Delight is perhaps Savak’s most varied collection of tunes so far, and it demonstrates the versatility of the band members as musicians and writers. The album never feels thrown together, though—even with six bass players guesting, Human Error / Human Delight comes over as a unified band statement. 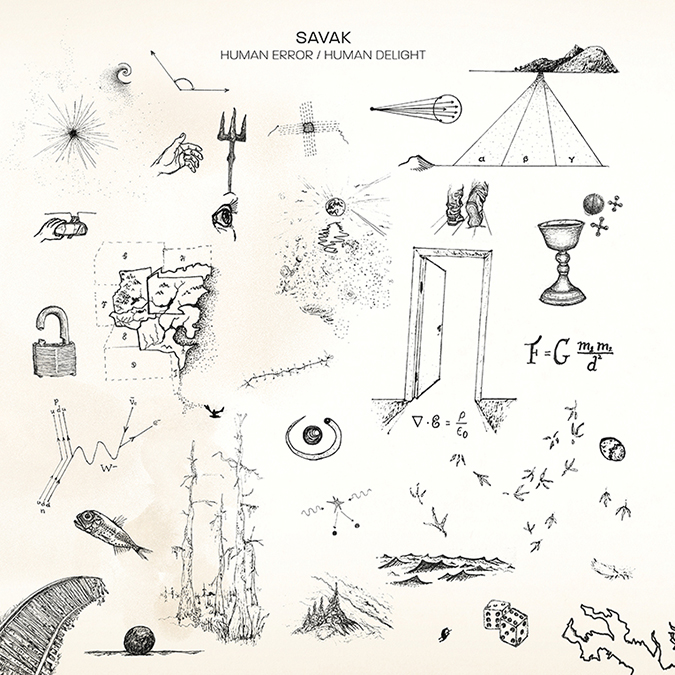 “No Blues No Jazz” is a blast of rock’n’roll energy that benefits from the tight interaction of the two guitarists. The song argues for a breaking-down of genres and borders. It gets its energy from distorted, edgy guitars, but Habibion and Jaworski play with fire and intelligence that stays just at the edge of anarchy. Josh Sinton, another Brooklynite, provides some saxophone lines that add grit without pushing the track over the top.

“Empathy” balances chiming arpeggios and harder-hitting guitar riffs in service of a strong power-pop melody. The lyrics focus on the lack of compassion and warmth in these difficult times, but a dash of humor keeps the song from being smug or self-righteous:

“My Book on Siblings” got my attention—and affection—by namechecking philosopher Michel Foucault and “French Freud” Jacques Lacan, while also suggesting that we “compare our tax exemptions.” The clever lyrics are matched by sonic wit, in the form of an old-time drum machine and crisscrossing, layered guitars. Even Savak’s busiest, most aggressive tracks show an impressive amount of dexterity and intricacy in the communication between the two guitarists. 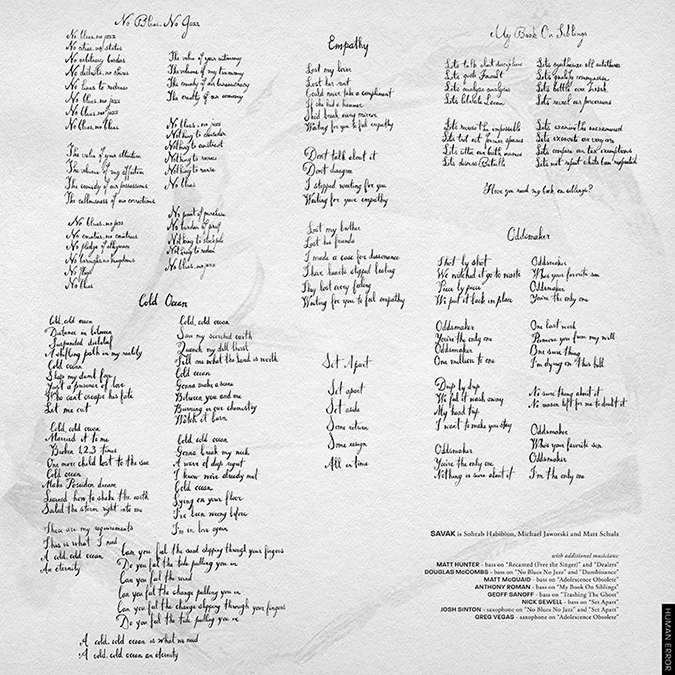 “Set Apart” benefits from Stinton’s sax lines and Nick Sewell’s thumping bass, and the song adroitly combines melody and noise. Popping guitar lines and swirling effects give it a sense of urgency and create momentum, but Savak is able to switch to sparer arrangements without losing its edge. “Oddsmaker” pulls back the volume and lets the guitar chords ring out, but a few well-placed shots of distortion add some tension to the track.

I’ve highlighted the guitars on Human Error / Human Delight, but Schulz’s nimble and responsive drumming keeps the songs firmly grounded and swiftly moving. The bassists, among them Matt Hunter, Douglas McCombs, and Geoff Sanoff, are active in various indie bands. The members of Savak also came from that scene, playing with bands like Obits Edsel, and The Cops. As a result, Human Error / Human Delight moves easily from punk, to post-punk, to garage rock, and beyond. 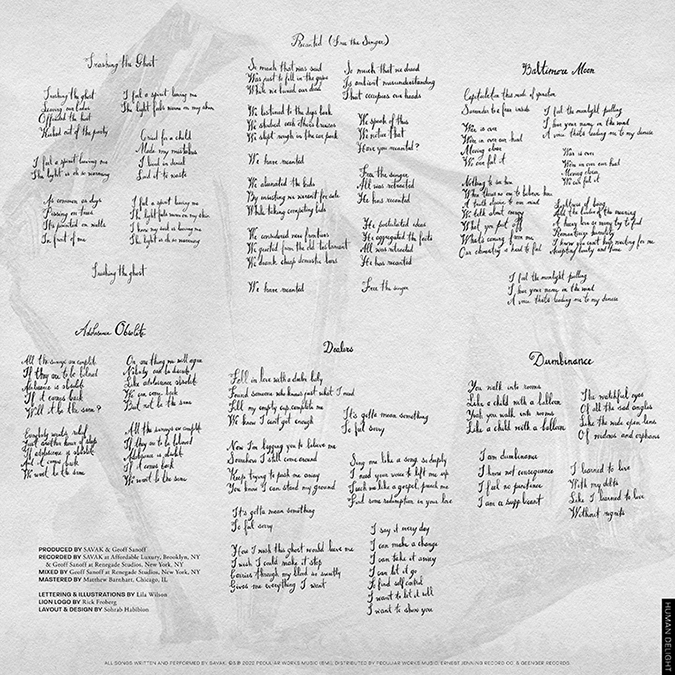 Savak recorded Human Error / Human Delight at two studios in Brooklyn, New York, and the sound was nicely balanced, with enough compression to give the songs rock’n’roll zip without overwhelming them. The vocals were centered and forward. The vinyl release of Human Error / Human Delight was pressed in the Czech Republic by GZ Media, and my copy was flat and generally quiet, with some occasional, very slight groove noise between tracks. The heavy-cardboard album cover with tipped-on artwork is a luxurious touch, given the LP’s $20 price tag.

Human Error / Human Delight shows Savak to be a great rock’n’roll band that takes in a variety of influences in order to carve out a unique sound. “Trashing the Ghost” is great mid-1960s garage rock, while “Dealers” would have fit neatly on Neil Young’s Everybody Knows This Is Nowhere. Like all great bands, Savak shows its debt to its precursors while building on their work.