Details
Written by Joseph Taylor
Category: Recording of the Month
Created: 01 May 2017

Vince Clarke had already made his mark in two bands when, in 1985, he formed the synth-pop duo Erasure with singer Andy Bell. A founding member of Depeche Mode, Clarke had written three of its early hits, “Dreaming of Me,” “New Life,” and “Just Can’t Get Enough.” He left shortly after the release of that band’s first album, Speak & Spell (1981), and, with singer Alison Moyet, formed Yazoo (known in the US, for legal reasons, as Yaz).

After two albums with Yazoo, Upstairs at Eric’s (1982) and You and Me Both (1983), Clarke did a brief project with producer Eric Radcliffe before placing an ad in Melody Maker in 1985 to find a singer for his next venture. He chose Andy Bell, who had admired his work with Depeche Mode and Yazoo. The new group, Erasure, released its debut, Wonderland, the following year. While Clarke’s earlier band associations were brief, Erasure has now endured for more than 30 years.

My CD of Wonderland was pressed in 1985. Recently, when I played it, I was transported back to the early days of MTV, spiky hair, and the beginnings of synth pop. While I enjoyed reliving a time when I had hair, the recording felt dated. Kevin Gray’s remastering for Intervention Records’ reissue of Wonderland on vinyl fleshes out the music and gives it a larger, more impressive scale. The keys in the opening track, “Who Needs Love Like That,” are now more harmonically layered and textured, and the electronic percussion has more bounce and thickness. 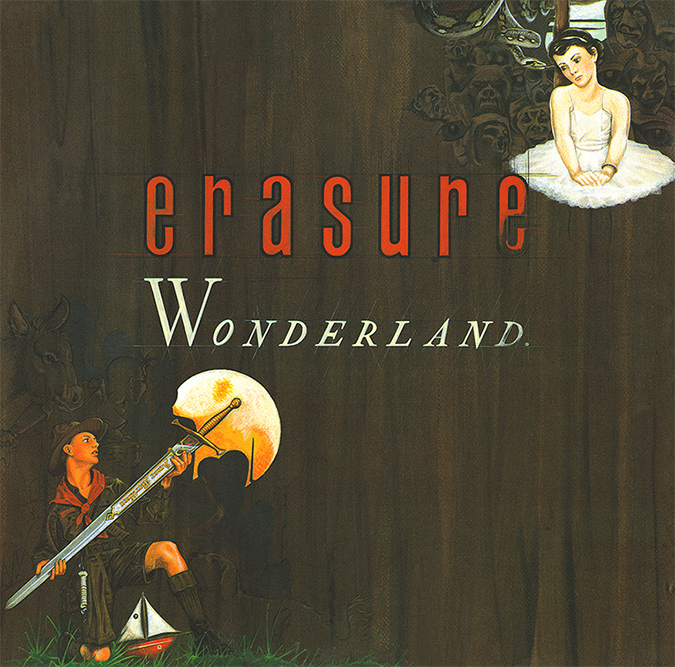 Throughout the album, bass keyboards now punch harder and move more air -- on my 32-year-old CD, they seem to lie flat against the wall. Other details, ones that give structure to the music, also have stronger impact on vinyl. The percussion splashes in “Reunion,” an important part of the overall arrangement, are now more audible, focused, and precisely placed on the soundstage. Bell’s voice sounds more expressive -- on the CD, his vocals sometimes feel mannered; on the new LP, his singing is more emotionally involving and nuanced.

The intro to “Cry So Easy” is less involving on the CD, but on LP it fills the room, sounding larger and more complete. The electronic percussion has a harder-edged snap, and the bass keys are stronger and more forceful. The keyboard washes are somewhat reserved on CD, but expansive and deeper on this pressing. On CD, Bell’s backing vocals are far behind his lead vocal in the mix. On the new vinyl, they fill out the sound and help give his lead more emotional resonance; tiny keyboard arpeggios come farther out into the room, to pull me deeper into the music.

Wonderland was not immediately popular, but a 2003 remix of the final track, “Oh l’Amour,” became a hit. A bouncy, frothy pop song with a compelling rhythm track, “Oh l’Amour” is filled with Clarke’s witty use of electronics. Bell’s voice begins the song, accompanied by a chorus of his own multitracked vocals. His lead vocal is fuller and more nuanced on LP, and the backing chorus sounds richer, spreads wider, and is more essential in supporting his lead. 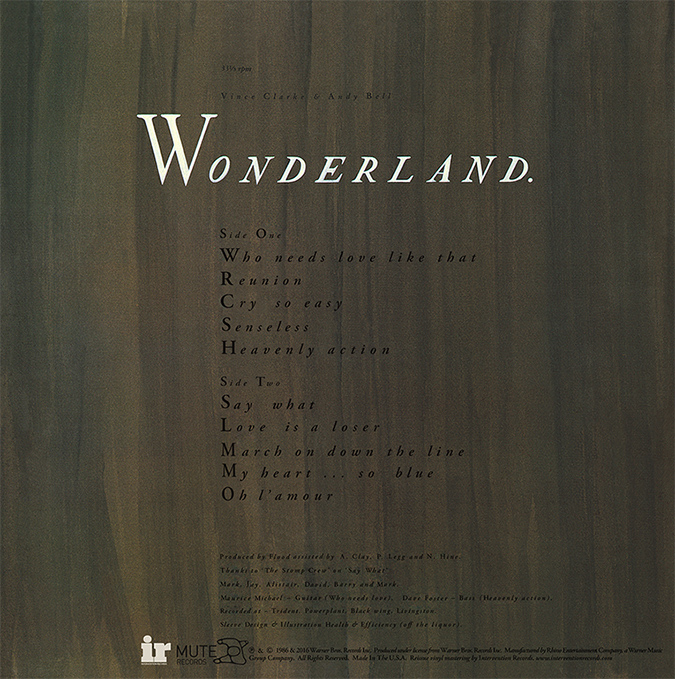 The keyboards have much more shimmer and life on vinyl, and the electronic drums are punchier, livelier, and hit harder. They’re still identifiably electronic, but their tone is now more intricate, and it’s easier to hear how clever and witty Clarke was in how he used them. If you don’t like synth pop, even this new pressing of Wonderland won’t make you a believer -- but it’s far more musically compelling and enjoyable now than on that early CD. I hear Erasure’s influence in the music of younger musicians, including Lady Gaga (listen to her “Bad Romance”) and Tegan and Sara.

According to a note on Intervention’s website, “Mastering notes included with the tapes show that the original LP was bass-limited from 40Hz down. Of course we restored the wonderfully full bass response that’s present on the tapes, and mastered wide open with no compression applied.” Kevin Gray’s mastering, from the original analog tapes, results in a terrific-sounding LP. On the original CD, Wonderland is a nostalgic return to the 1980s -- a guilty pleasure. On this LP, the music fills the room with such a deep, wide soundstage that it’s easy to envision a dance floor coming alive to its sounds.